Ultraman Leo episode 50 "Terror of the Saucer Race Series - The Life of Leo! The Miracle of King!"

Black End (ブラックエンド Burakku Endo)[1] is the last and strongest Saucer Creature from Mazelan Nebula (マゼラン星雲 Mazeran Seiun) who appeared in the TV series, Ultraman Leo. He appeared at the end of episode 50 and episode 51.

The last monster used by Black Directive, Black End was unleashed on Tokyo. Devastating the city, the creature awaited for its challenger to come, but Gen refused to turn into Ultraman Leo again. Denied his fight, the monster burrowed under ground and waited for the hero to regain his confidence. The time came in the next day, and as Black End began to rip the city apart again, Gen transformed into Ultraman Leo.

The dragon-like creature lashed out, but Leo managed to get the upper hand. To prevent the beast from losing, Black Directive took Toru Umeda as a hostage. Allowing himself to be beat down, all looked grim for the giant until Ultraseven encouraged him to show the enemies his powers & several children that he trained for the past few months attack Black Directive.

Able to fight back, Leo tossed the creature aside and grabbed Black Directive’s crystal orb, energized it, and then threw it. The orb exploded on contact, killing Black End and for Leo killing the last of Directive's servant, Black Star. 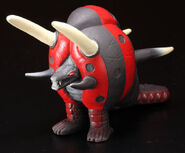 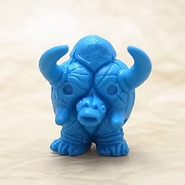 A figure of Black End 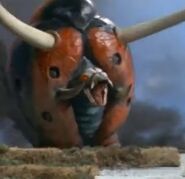 Black End having his own horns shoved in his mouth

Black End with his horns stuffed in his mouth

Black End after having Black Directive's orb thrown at him

The end of Black End 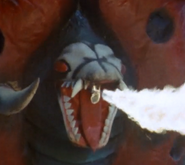 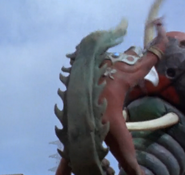 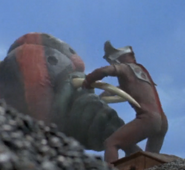 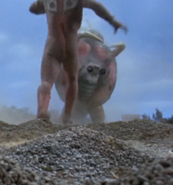