(Flight Sound)
Black Dome (ブラックドーム Burakku Dōmu), or Blackdoom[1] was the second saucer beast who was summoned by Black Directive. It originated from a black hole as a modified space crab.

After Ultraman Leo brutally killed Silverbloome, Black Directive used his crystal ball to summon his second saucer beast, Black Dome. The crustacean-like beast was quick to transform and head to the Earth. Due to the destruction of MAC by his predecessor, there was no warning for humanity. But as the saucer creature flew through the sky, a group of children spotted the monster's descent and took pictures. Reacting to the flashes, Black Dome emitted some return, attracting it to the children. Upon its master's command, Black Dome unfolded its true form and began its onslaght with its acid foam and pincers. Luckily for the city, Gen arrived on the scene as the beast badly injured the children's parents. Taking a piece of metal, he drove it into a crack in the monster's exoskeleton. Hit in the weak spot, the monster roared in agony and retreated into its small form. Black Dome was eventually discovered by Gen and a young boy, causing it to become its giant form again. The beast pursued the two, but Gen transformed right as it was about to reach him. Leo took on the beast, but was soon burned with acid. With his foe stunned, Black Dome attacked him, managing to pin him on the ground with his pincer but Leo broke free and spun rapidly in the air, knocking the acid off. The monster tried to attack again with its acid but Leo avoided it. With an opening, Leo fired the Leo Cross Beam into the beast's mouth, causing acidic foam to erupt from all over the monster's body. Roaring in pain, Leo put Black Dome out misery with his Shooting Beam, blowing the monster to bits. 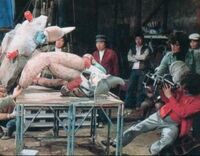 Retrieved from "https://ultra.fandom.com/wiki/Black_Dome?oldid=510329"
Community content is available under CC-BY-SA unless otherwise noted.