"I hold no will. I was created to multiply and purify the atmosphere. That was my only job"

―Bizaamo's explanation about his past.

Bizaamo (ビザーモ Bizāmo) is a Kaiju that appeared in the TV series, Ultraman Tiga. His early form was a gelatinous, reddish life form named as The Life Form of Planet Bizaamo (惑星ビザーモの生命体 Wakusei Bizāmo no Seimei-tai), but later demonstrated that it could also transform to gain a complex body capable of taking on even an Ultra. Bizaamo's origins were further explored in the 2000 novel The White Fox Forest, written by one of the series' writers, Hideyuki Kawakami.

Bizaamo was an artificial life form created by combining the genetics of the space plant Sorcas (ソーカス Sōkasu) with the space amoeba creature named Atabila (アタビラ Atabira). Its creator was Satala, who was tasked by the alien colonizer of Planet Bizaamo to solve the sudden depletion of oxygen on their planet (implied to be a result of rapid urbanization). The initially docile creature developed intelligence from its surroundings and converted harmful gases into oxygen. For a temporary period, Bizaamo successfully saved the alien beings from extinction and Satala won the award for its scientific discovery. This lead the alien population to share the Bizaamo with various planets, sending them out into outer space as they wanted other planets to benefit from their creation. However, Bizaamo's self reproduction capability soon proved a problem as the entire planet became a dead star. Without electricity to feed on, the Bizaamos went into a state of suspended animation on that still dying planet.

One of the scattered Bizaamo in outer space landed in the South Pole. After being discovered by TPC, Bizaamo was studied, but its heavy expulsion of Oxygen poisoned the scientists, stopping them from studying it any further. Bizaamo then introduced itself to GUTS and informed them of its prime objective: to produce Oxygen by converting foreign chemicals. While GUTS was openly accepting of this display of the idea, Bizaamo's intentions were not based on compassion, but rather the explicit instructions in the programming Satala had given it when creating the species.

Bizaamo then took Horii of GUTS as his hostage and began sucking the electricity dry out of GUTS's HQ without there being anything that GUTS could do to stop it. However once Horii was able to divert a special password to his comrades, the base's power was diverted to a backup source, preventing Bizaamo from feeding any further. As a result, the Bizaamo blobs fled, taking both Rena and GUTS Wing 2, and fled to find an energy plant in a nearby city. GUTS was quickly in pursuit so Bizaamo quickly ejected itself into some power lines while Ultraman Tiga arrived to save Rena. Feeding off the mass quantities of electricity from the power lines, Bizaamo mutated further into a giant monster and fought with Tiga itself, who was trying to protect Rena during their fight. Once Rena was rescued however, Tiga quickly regained control of the fight and transformed into Power Type, tearing off Bizaamo's horn and arms, before destroying the life form with the Deracium Beam Torrent.

The Life Form of Planet Bizaamo 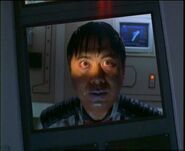 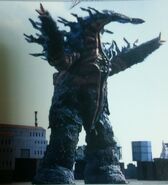