Ultraman Dyna episode 18 "The Girls Who Calls Up the Darkness"

Three high school girls, Erika Honjou, Mizuki Kuno and Saya Nagase had associated themselves with witchcraft and used it to create an evil spirit named Bishmel. The trio used it to exact their revenge on any student that rejected them. One day, Asuka and Ryo investigated the high school area which was believed to be the source of the monster. Knowing that Super GUTS would interfere with their plans, they summoned Bishmel and ordered it to kill Asuka and Ryo, who were patrolling via Zellet. Fortunately, Asuka fired his Zerarian Cannon and the monster vanished, canceling the dark magic ritual that the trio of schoolgirls planned. The next day, they recruited another vengeful schoolgirl named Yuki Hirokawa, who was unable to participate in the swimming club. Meanwhile, Asuka and Ryo witnessed a crack on a security mirror, figuring that Bishmel would appear in the cracks.

That night, while patrolling, Asuka witnessed a schoolgirl walking out as Bishmel appeared again, attempting to drag the girl to her death. Asuka caught the girl and Ryo fired at the monster while rescuing both Asuka and the schoolgirl. The four witches were angered that Super GUTS interfered with their plans. When Ryo and Asuka entered their high school again, Asuka was pushed into the swimming pool by the girls and Ryo was absorbed by the headmistress who was revealed to be Bishmel. One of the witches, Yuki, developed a change of heart and decided to quit witchcraft as the others followed, causing Bishmel to enlarge and darkened the sky. Asuka transformed into Dyna but was unable to fight the monster due to having absorbed humans and he feared that he would harm them. The former witches went to their magical circle and destroyed it, releasing all of Bishmel's hostages and enabled Dyna to defeat it by using the Revolium Wave. The next day, Asuka and Ryo revisited the school as the previous witches came to Asuka and admired him, Ryo then went away and abandoned him at the school out of jealousy. The Girls Who Calls Up the Darkness

After a strange comet fell into Matsumoto City, various past enemies of Super GUTS and GUTS began roaming the city, scaring the citizens. Super GUTS officers Ryo and Asuka were on patrol when suddenly Ryo witnessed an apparition of Bishmel, while Asuka saw Alien Raybeak. The two fiends then disappeared, leaving a confused Ryo and Asuka in their wake. The Power of Thinking of You 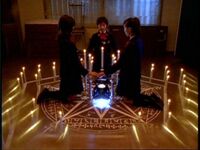 Add a photo to this gallery
Retrieved from "https://ultra.fandom.com/wiki/Bishmel?oldid=510325"
Community content is available under CC-BY-SA unless otherwise noted.