Mirror Fight episode 37
Big Eye (ビッグアイ Biggu Ai) is a Kaiju created by the Invaders to fight Mirrorman in episode 19 of the Mirrorman series.

One night the Invaders launched a missile called the Ozmar toward the SGM base. Within minutes the Self Defense Force launched four anti-ballistic missiles to counter the Ozmar, unaware it was a diversion for the Invaders' real plan. A pair of killer plants that formed the monster Big Eye were anonymously sent to Dr. Mitarai and Asako put them in the base for decoration. As the SGM was distracted the alien plants began to emit toxic gas, soon combining to form its monster form while the Ozmar plowed through the anti-ballistic missiles. The base evacuated while Kyotaro stayed behind, soon discovering Big Eye was causing trouble. It began to strangle Kyotaro as the Self Defense Force was unable to halt the Ozmar. Soon her was able to turn into Mirrorman using spilled water from a vase. The two giants clashed, the hero managing to land more hits than the alien plant. Big Eye managed to hit Mirrorman with his powers after being punched in the eye multiple times just as the Ozmar was closing in. Mirrorman eventually ended the fight with one use of the Mirror Knife took Big Eye down followed by the Ozmar with a combination of the Defense Mirror and Silver Cross.

Big Eye appeared in episode 37 of Mirror Fight. Stock footage of his fight in Mirrorman was reused in this series. 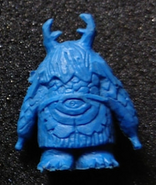