The children to Queen Bezelb, they were represented as darkness to the War Deity's light and was meant to be defensive systems of the Tree of Life should intelligences becomes nuisance to the universe, until they defected and contemplate to destroy said tree. Now led by Psychi, their mission is to spread to the entire universe and infect any being in their sight, doing so to empower Queen Bezelb's Kugutsu.

One single Bezelb was on Planet Rurin, who infect a pair of Rurin natives into fighting each others before the intervention of Gai and Juggler. After said Bezelb killed its victims, Gai transformed into Ultraman Orb where he first had the difficulty of fighting said monster until he managed to defeat it in his second fight, marking it as his first kill. Glittering Star

On Zain, a swarm of Bezelbs participated in fighting against the intruders, as well as Ultraman Orb and Dyna before they left with Psychi's ship. EchoAfterwards ~Tragedy~ As the ship arrived on Kanon, the Bezelbs infected Vakishim and Verokron as part of their ranks to join them in the raid, provoking Amate to transform into the War Deity. Dawn Smaller platoon of Bezelbs are shown fighting against Kanon's defense army, with one successfully killed Micott and provoked Juggler's first transformation into a Majin, leading to the destruction of the Tree of Life. War Deity (episode)Wrap ~Dazzling~

The troop retreated to Psychi's ship and arrived on Earth, where one of them kidnapped Shohei before Orb rescued him. Sound Two other giant Bezelbs had also fought against the Earth Ultramen Gaia and Agul before an entire army gathered to protect the Tree of Life under Psychi's orders. Touch ~Theory~ After the Queen successfully infect and turned the War Deity into a Kugutsu bomb, the Bezelbs protected her by successfully incapacitating resistances of their campaign. Flower Storm They soon participated in the final battle, now lead by Psyqueen to fight the Ultra Warriors and destroy the Tree of Life. Heat Haze Following Queen Bezelb's death, the Bezelbs are nowhere to be seen afterwards, with the race presumed to be extinct. Great Land ~A New World~

Makoto Aizen (Cereza) summons Bezelb using his Gyro to cause destruction in Ayaka City. However, this was all just a setup so that he could transform into Ultraman Orb Dark and defeat it, and improve his public image. Unfortunately for him, Rosso and Blu show up and defeat the Bezelb using a combination of their powers before Orb Dark is able to, upsetting him. 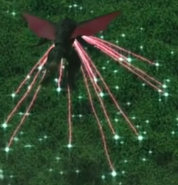 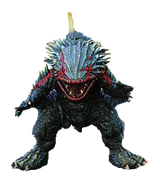 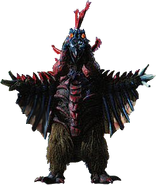 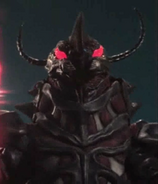 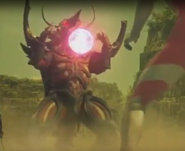 Orb getting hit by the Energy Ball