In Use
The Beta Capsule (ベーターカプセル Bētā Kapuseru)[1] is Ultraman's Transformation Item, given to Shin Hayata. It became temporarily unusable when Ultraman left Earth, but sometime in between the original series and Return of Ultraman, Ultraman returned to Hayata and it became usable again.

Shin Hayata, the Executive Officer of the Tokyo, Japan headquarters of the Science Patrol, was patrolling in the vicinity of the Ryugamori Lake and Forest when he noticed a U.F.O. flying over them at a speed of Mach 2. The UFO, a large blue sphere, was the "Travel Sphere" used by the then unseen monster Bemular. When Hayata flew closer to investigate, another UFO, this one a red Travel Sphere that had been in pursuit of the first, crashed into Hayata's "Sub VTOL." The being inside the red Travel Sphere, which was damaged in the collision and subsequently self-destructed, was the hero known as Ultraman.

Ultraman telepathically informed Hayata that he had been pursuing the monster Bemular, and had accidentally crashed into Hayata's ship when he was trying to follow Bemular. He then gave the Beta Capsule to Hayata, merging Hayata's body with his own to provide the dying human with his own life force. After that, using the power of the Beta Capsule, Hayata could transform into Ultraman.

Later on, after Ultraman's defeat at the hands of Zetton, Zoffy appeared to retrieve Ultraman. Knowing he could not take the human back with them to the Land of Light, Zoffy pulled out his own Beta Capsule and separated the bodies of the two beings, but Hayata was apparently left with no memory of anything that had happened after his Sub VTOL had crashed.

Ultraman Powered gave Kenichi Kai a device, which in the English version was called a Beta Capsule though its Japanese dub name was the Flash Prism (フラッシュプリズム Furasshu Purizumu). Instead of holding it upright, Kai held it in his clenched fist, and it had two LEDs, one on each side. It was, perhaps, a newer version of the same device.

In Ultraman X The Movie: Here He Comes! Our Ultraman, Alien Fanton Gourman created Ultraman's Cyber Card along with Ultraman Tiga's Cyber Card in Xio's lab; these were then transferred to Mamoru Mikazuki and Rui Takada to be given to Ultraman X's human host, Daichi Oozora. He scanned both Cyber Cards to receive the X Beta Capsule and the X Sparklence to form the Beta Spark, which allowed Ultraman X to wear the Beta Spark Armor.

To employ the Beta Capsule, Shin Hayata holds it in his right hand, with its clear emitter dome pointing upwards, and depresses the red button on its side with his right thumb, causing the chrome cap at the top of the capsule to rise up. The device then either emits a spiral of energy or a bright flash called the Flash Beam (フラッシュビーム Furasshu Bīmu) which triggers his transformation into Ultraman. Merely exposing the Capsule is not enough to employ it; when he faced an enemy who sought to possess, rather than destroy, Earth, that enemy paralyzed him before he could depress its button, and he had to allow himself to fall down face-forward, which caused the impact to make his thumb depress the button. This can be described as "igniting" the Capsule.

The Beta Capsule is used by Ultraman (Ripia) disguised as Shinji Kaminaga to transform into his true form, "Shinji" does this by pressing the button. During the transformation, Ultraman's translucent red fist surfaces and grabs "Shinji", and rises from human size to his true height as a flash of red light accompanies the transformation. 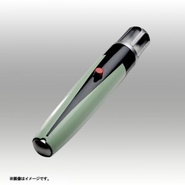