Fireman episode 28 "The Boy That Came From the Planet Argon"

None
Bemusa King (ベムサキング Bemusa Kingu) is a Kaiju that appeared in episode 28 of the TV series, Fireman.

When Devilsaurus attacked a village, Alien Emusa and the Bemutan attempted to save the old fisherman who helped them by becoming the monster Bemuta King. The two monsters clashed with Bemusa King slowly losing until a combination of Devilsaurus's wrist cannons and a throw attack forced them to unfuse. 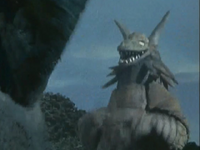 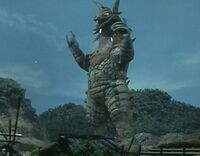