This may not be the article you are looking for. For the Ultraman kaiju, see Bemular.

"That power should not exist on Earth."

Tsutomu Isobe (Motion Comic)
Bemular (べムラー Bemurā) is a character in the ULTRAMAN manga series. He is an enigmatic being who has both worked with and against the protagonists and antagonists alike, and holds most of the greatest secrets to the story overall.

Bemular's agenda is a mystery other than the fact that he initially wanted the Hayata father and son dead. However, he seemed to be more interested in Shinjiro's developing Ultraman Factor after their first confrontation. Bemular was also willing to save Seiji's life, showing that he is capable of compassion at least to a degree.

Bemular was first seen twelve years prior to the manga's present, on video when Shinjiro was a child, his father saw his Ultra like image on a video recording of him blowing up a plane for unknown reasons. It was this image that triggered Hayata's missing memories of his time as Ultraman's host.

Two years later, Hayata fought and defeated, presumably killing the alien being. Bemular was believed to be dead but unfortunately that was not the end of him. Seven years before the present, when the SSSP attempted to admit Earth into the Universal Alliance, Bemular was somehow resurrected, perhaps by the same force that created him in the first place, and became an enemy of mankind once again. He appeared to stop Earth's admittance into the Universal Community, however that plan ultimately failed. Since then it can be assumed that he fought with Hayata several times or simply went into hiding. At some point in time he learned of Hayata's son and set about to remove all of those with the Ultraman Factor.

Years later on a normal night he attacked Shinjiro chasing him across several rooftops until they reached a baseball stadium. As Bemular moved in for the kill only the timely arrival of his father in his battle armor saved the boy. After Hayata threw his son to safety into an SSSP carrier plane, the two fought, their dialogue revealing that they were nemesis to each other having fought each other for years. Unfortunately, Shin was now at least sixty and his old age slowed him down and he was gravely wounded. While it seemed the old hero would soon die his son appeared wearing the new more Ultra-like battle armor and took over the battle in his father's place. Bemular no longer had the advantage, Shinjiro was young and rather angry over his father's injuries. While the boy had the advantage, although Bemular nearly blew off his head with his heat ray. For whatever reason Bemular decided to finish the battle and formed a massive sphere over his head, while Shinjiro prepared the Spacium Beam. In the ensuing clash of attacks Shinjiro won, with Bemular's left side being blown off, to the boy's shock the figure in the armor was clearly not human, instead a reptilian creature with a mouth full of fangs who declared his name and flew of.

Some time later after Shinjiro's battle with Alien Adacic, Bemular stood on top a skyscraper over looking the hospital where Endo was seeing his daughter Rena and watched the four-eyed alien that spied on them. He appeared to now be fully healed and his armor repaired. He spoke to some unknown individual over communications and declared it was time to move to the next phase of their plans, somehow aware of Shinjiro's and the SSSP's latest movements.

Bemular later appeared before detectives Endo and Kurata, alone at night. He declared that he wanted Endo to solve his case and stated that he had always been watching over the man. He was also mentioned by Shin in a conversation with Ed and Mitsuhiro that during their last battle Bemular was not serious and could've killed him at anytime, bringing into question his motives.

He later appeared to Endo alone, and warned him that Rena was in danger, before disappearing. Later that night, when Agent Adad attacked Rena and her fans, Bemular reappeared to help the alien fight Shinjiro and Moroboshi in their Ultraman suits. His reason for being there, was that his organization sent him to assist Adad.

As he fought with Shinjiro, he chastised the young man's naivete and was in turn rebuked by him. When questioned why he was so interested in Shinjiro, his response was that he (Shinjiro) "was about to become Ultraman". When Alien Igaru revealed himself, Bemular took his leave, but not before telling Shinjiro to stay and see world he blindly "stepped into".

During the confrontation with Ace Killer and his goons, Bemular confronted an Alien Awarzu criminal and learned the location of Seiji Hokuto and the team of assassins sent after him. The alien arrived after the fight, to find Seiji wounded and Ace Killer dead at the former's hands. He then offered to save the earthling's life, claiming "it is not the first time" he has saved a human. Shinjiro allowed him to remove the wounded Hokuto from the aftermath.

Three months later, Bemular appeared with Seiji to save a group of people from an alien in a forest. They then went to New York to fight against the Star of Darkness. The two of them helped Shinjiro hold up a falling building, saving Rena and a group of citizens. At the climax of the battle, Shin and Shinjiro fired their Spacium Beams at Alien Pedan, the leader of the Star of Darkness. Their combined efforts were still not enough, so Shin asked Bemular for help. He agreed to lend a hand, and the three of them finally destroyed the Pedan. After the battle was over, Shin revealed Bemular's true identity to Shinjiro.

Soon after the incident in New York, Bemular approached Endo and told him that it was time to let Rena know about her origins. He then went to Rena and told her that she is not human, which would explain her barrier powers. 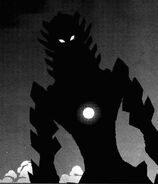 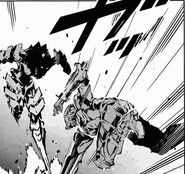