Bemular[2][3] (ベムラー Bemurā) is a ruthless, alien, reptile-like monster that somehow managed to escape from the Monster Graveyard. He was confronted by Ultraman on Earth and was destroyed. Many more members of this species appear throughout the Ultraman Series.

Escaping from the Monster Graveyard with Ultraman in hot pursuit across the universe, Bemular made his way to Earth and landed in Lake Ryugamori, hiding himself while Ultraman crashed into Shin Hayata's ship, killing him and out of grief, merging with him to better protect the planet.

Meanwhile, the Science Patrol went after Bemular, who was still hiding in the lake, using Sub S22 (piloted by the revived Hayata) to make Bemular come out of hiding. Bemular, however, grabbed the ship with his jaws and hurled it to the ground and proceeded to set it on fire with his heat beam.

For the first time ever, Hayata used the Beta Capsule as directed by his savior and the being called Ultraman appeared to fight against Bemular. After a long and brutal fight, Ultraman used the Spacium Beam to destroy Bemular as he was trying to escape again. Ultra Operation No.1

Unlike the majority of monsters that appear in the film, Bemular was pursued by Ultraman Mebius throughout space, Bemular lands on a desert-like planet to do battle against Mebius. However, the battle was short and Ultraman Mebius defeats him with the Mebium Shoot.

Bemular, Telesdon, Gudon, and Sadola were revived by Gurashie and together they fought Ultraman Zero. Bemular fired at Zero first but Zero blocked it. Both Bemular and Telesdon were killed by Zero's Miracle Zero Sluggers. A New Power

Bemular reappeared in episode 9 of Ultraman Ginga S, Monslived by Alien Guts Vorst to assist Bemstar in fighting Victory by firing his Energy Blasts and even when Ginga appeared to help him, they confused them with the teleportation and duplication skills inherited by Vorst. After dodging a Victorium Shoot by splitting in two, Bemular tied them up with energy ropes that were broken when Bemstar rammed into them. The two Ultras dodged the ropes shot by Bemular a second time after Bemstar absorbed Ginga's Ginga Cross Shoot. Bemular, his clone, and Bemstar eventually got tied up after the two Ultras tricked them. Bemular was then killed after Ginga transformed into Ginga Strium and fired Ultraman's Spacium Beam at him (the same move that the original Ultraman killed the first Bemular with) and then, its clone disappeared. Life in the Resurrection

Fifteen years later, another member of its species appeared in Canada, emerging from a lake and tried to attack Lt. Sayuri Tachibana's family members. It wasn't until Sayuri merged with Ultraman Nexus that her family was safe. Sayuri/Nexus killed Bemular in the aftermath off-screen. Bond -Unite-

An evolved Bemular known as Bemular (Empowered) (ベムラー (強化) Bemurā (Kyōka)) was summoned by Alien Shaplay after he absorbed the energy from the necklace of a young girl using a Slimtonium stone, which he sold as a necklace.

Bemular emerged from the ground and used his special weapon to lay waste to the surrounding city area. Gai Kurenai immediately transformed into Ultraman Orb Spacium Zeperion with his Orb Ring to fight the monster while Shibukawa dealt with the alien. For the first time in a while, Orb was actually able to deal with the monster easily in his Spacium Zeperion form in close combat. However, when he tried to finish him off with his Sperion Ray, Bemular used his horns like a lightning rod to conduct the attack and counterattacked with his Hyper Pale Heat Wave, leaving Orb exposed to the monster's stomping. Orb managed to get Bemular off him, though, and gained the upper hand again by throwing him and dodging his attack. Unfortunately, the monster turned the tide against Orb once again, resulting in his Color Timer flashing.

However, Orb didn't give up and transformed into his Orb Origin form to even the odds. The Ultra struck him with an energy slash from his Orbcalibur and used it to block the monster's energy attack. After he cut off Bemular's horns, Orb finished off Bemular with his Orb Flame Calibur, which encased him inside a fire ball. As Shibukawa finished off Shaplay by striking an oil can with his gun, igniting it and obliterating him, Orb destroyed Bemular with one final slash of his Orbcalibur. Hard-Boiled River

Bemular was a monster from Planet M35, who was brought to Earth one night, having been summoned by Alien Hook, who plotted with Seiji Komori to overthrow humanity and turn Planet Earth into a place for aliens to live. Ultraman Fuma first fought it, but switched places with Ultraman Titas later on. After a short fight, Titas used his Astro Beam to destroy Bemular while the Hook watched their battle. For the New World 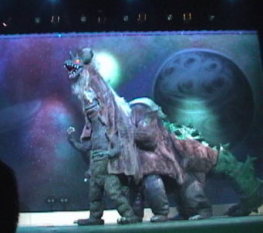 Evolved Bemular is a strange version of Bemular that appeared in a 2003 stage show meant to celebrate the release of Ultraman Cosmos vs. Ultraman Justice: The Final Battle. It was created by aliens from a parallel reality to help in taking over the human world. It has a close resemblance to Zog and is portrayed using methods similar to Chinese parade dragons.

Appearing as a blue sphere at the end of the game, Bemular is seen flying to Earth while being chased by a red sphere.

Bemular appeared in episode 21 and 22 of the series, Ultra Zone

Bemular, appears in the 2011 manga ULTRAMAN, with a very different design from his original appearance, the now humanoid and fully sentient Bemular serves as Shinjiro's first opponent in the incident that revealed to him several secrets about himself and his father.

Bemular is set to appear in the Marvel Comics series The Rise of Ultraman, filling a similar role as he did in Ultraman. In the 1960's, Kyoko Kato and Satoru Ichinotani chased a Bemular all the way to France, where it tormented the local agency for fighting monsters. The creature escaped into the ocean and vanished. It later returned and was bested by Ultraman in combat.

Bandai has made many Bemular figures. In 2014, he was in the Ultra Monster 500. He has 3 points of articulation. 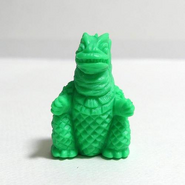