Conquer the galaxy and invade Land of Light

Belial Galactic Empire (ベリアル銀河帝国 Beriaru Ginga Teikoku) is an invasion army formed by Ultraman Belial, now named as Kaiser Belial. The group's main base of operation is the Malebrandes.

Following Belial's survival from his near-death experience as Belyudra, he established an army of his own bent on conquering the universe.

He soon creates a prototype robot made into his enemy, Ultraman Zero's likeness, Darklops Zero and used the robot as an inter-dimensional transporter. However the experiment ended in failure as Darklops lost in space, unknowingly scavenged by Alien Salome. Ultra Galaxy Legend Gaiden: Ultraman Zero vs. Darklops Zero

Soon he created the mass-production type Darklops but unlike the first model, they were empowered by Emeralds instead and use Delusts as carrier ships. After invading Planet Emerald, he sent several Darklops and Legionoid troops in his conquest to expand his empire's influence. Several Darklops were sent to the Land of Light to attack its inhabitants, which was enough for Ultraman Zero to investigate the cause and travels to an alternate universe to find the perpetrator, his own arch-enemy. With his friends, Zero assembles a large group of resistance against Belial Galactic Empire and finally put an end to the army by killing Belial with Ultimate Aegis. However, even with the army went defunct and enslaved planets liberated, his remaining forces were yet to be eliminated, as several Darklops still functional in the outer space, prompting the newly formed Ultimate Force Zero to take care of them. Ultraman Zero The Movie: Super Deciding Fight! The Belial Galactic Empire 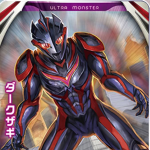