Jun Himeya, the second Dunamist of Ultraman Nexus, began to have strange nightmares of swarms of creatures attacking an old temple. However, upon waking up, all of the creatures were gone. Chosen One - Dunamist - 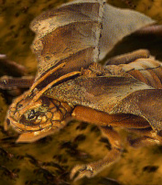