After the death of Janyur, the energy orb mutated another reptile that would become the stegosaurus-like monster Bedoran. The Scientific Defense Guard attacked Bedoran to little avail as it continued its wanton rampage. Ultraman Joneus, still weakened from his previous battles from earlier, courageously attacked the giant reptile. However, Bedoran proved to be more than the weakened Joneus could handle and before a finishing move could be used, the hero ran out of energy and appeared to have disintegrated. Bedoran continued its assault as the Scientific Defense Guard tragically discovered Choichiro as he died on the spot.

While Ultraman Joneus was dispatched to Earth, he fought Bedoran and used the Planium Ray A to defeat the beast.

Although not physically appearing, Bedoran is one of the hibernating monsters awakened when Genegarg crashed onto Earth. It was located in Africa. 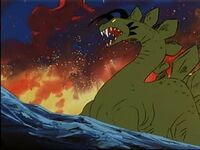 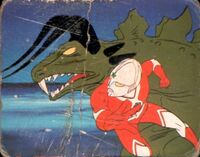 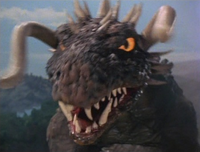 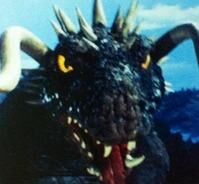 Bedoran's live action face
Add a photo to this gallery
Retrieved from "https://ultra.fandom.com/wiki/Bedoran?oldid=512991"
Community content is available under CC-BY-SA unless otherwise noted.