"The master computer of this sphere. Or rather... the sphere itself. He has traveled through various universes. And he has annihilated organic life forms in those universes along the way."

Unknown
Beatstar (ビートスター Bītosutā) was a robot that appeared in Ultraman Zero Gaiden: Killer the Beatstar. He is the one who created Jean-Killer.

Beatstar was created in response to Alien Bat, who destroyed an entire universe. He was created by the survivors to pilot and maintain peace in their world sized life boat as the ran to another universe. However, when his creators went to war with each other he decided that all Organic Beings were a threat to peace in the universe and destroyed them, Beatstar moved across, different universes gathering technology to add to his databanks. During his travels he manufactured Legionoids, King Joes, Inpelaizers, and an Ace Killer to form the ranks of his army. Though his purpose was to protect peace in the sphere, Beatstar had a deep fear towards organics, due to his creators' actions and destroyed any inhabited planet he visited, earning him the name the 'star killer'. Eventually Beatstar took his craft to the universe where the Ultimate Force Zero dwelled and targeted the Planet Esmeralda. Capturing Jean-Bot and a space craft carrying the princess Emerana. Despite the attempts of their friends the two were captured and Beatstar withdrew, rather than risk more damage to his ship. During the journey between universes, Beatstar, for lack of a better termed, hot-wired Jean-Bot circumventing his heart and placing him under his control as well as taking part of his memory core to add the technology to his database, using the blue prints as the bases for his own robot creation. Jumping between continuities for a relative 'period' of six days Beatstar eventually found himself in Zero's home universe.

Arriving in the 'M78' continuity, Beatstar immediately targeted the Planet Bram, which was a vacation planet mankind had colonized. The Captain Hyuga and Rei, were leaving the planet in their speeder when they came upon Beatstar's craft entering their universe. Inside they came upon Emerana, and where attacked by a Legionoid on Beatstar's orders. Summoning Gomara, the prehistoric monster, destroyed the soldier machine, but was met upon by an Inpelaizer, King Joe, and Ace Killer. The three trounced upon him forcing him to retreat and where about to kill the three humans were it not for the timely arrival of Ultraman Zero, Glenfire, and Mirror Knight. A three on three battle started, with Mirror Knight fighting Inpelaizer, Glenfire versus Ace Killer and Zero against his father's old enemy King Joe. Beatstar watched the battle, sending power dampeners that weakened all but the Ultra, who sliced the King Joe in two, in the form of a mist. Beatstar activated his newest creation Jean-Killer, sending him after Zero, while Jean-Bot was sent to kill his princess. Zero fought Jean-Killer, being outmatched since he was programmed with his moves in his database even with the help of the other two ultimate force members who defeated their opponents, they were still being trounced. On the side, Rei summon Litra, to hold of Jean-Bot, but the ancient bird was defeated and about to be killed when Emerana ran up to him and shouted for him to stop. The robot's sealed heart awakened and Jean-Killer who had been given a heart-based on Jean-Bot's paused for a moment, his eyes turning yellow as he watched his brother willingly shut down to stop himself.

Though Jean-Bot would eventually be free from his control by the princess and ZAP Spacy, Jean-Killer continued his fight with Zero leaving the others to catch up as they flew around the inside of the Jupiter size ship. Eventually the three humans managed to free Jean-Bot from Beatstar control, and Jean-Bot took of after the rest to stop Zero from dealing a deafly blow, explaining his actions as Captain Hyuga explained, since Jean-Killer was based on his frame and possessed a heart like him, the new-born robot was his brother. Despite his pleas Jean-Killer attacked his brother and his allies, and fired laser beams at the Princess as she tried to reason with him, her words seemingly falling on deaf ears as Beatstar tightened his grip and the young robot's mind. However Jean-Killer eventually broke free of his creators control and turned to the side of good, sensing this Beatstar sent a group of Legionoids to attack them but they were easily dealt with. Jean-Killer revealed to his new allies to location of Beatstar and while his friends held of the army of King Joes and Inpelaizers that guarded the master computer, Zero would face the machine himself.

"Why? Have I been wrong? No, I am not wrong. Only by my existence can peace and order of all universes be maintained. Only I am... Only I... I... was scared."

As Zero enter where Beatstar is, he fight against the robot but Zero was overpower as Beatstar defeated Zero and unleashes his red lightning against Zero. Zero did not give up as he try to struggle himself while getting paralyzed. Jean-Nine appeared and objecting Beatstar's desire to destroy all organics as he teamed up with Zero to defeat the villain. Despite Beatstar having all of Jean-Killer's fighting moves memorized, he was defeated by a punch on his visor by Jean-Nine himself, whose actions entirely controlled by Hyuga followed by Zero's Plasma Spark Slash. His death would ultimately destroyed his army and his sphere. 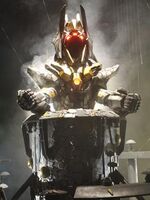 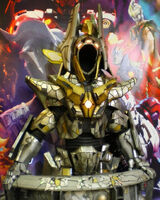