Satoshi Yamamoto (Reputiria and Bezerubua)
Junya Iwamoto (Idorobia)
Beast the One (ビースト・ザ・ワン Bīsuto Za Wan), also known as The One or The First Beast, is the ULTRAMAN movie adaption of the Kaiju Bemular. Both have the similarity of appearing in a body of water and coming from space, but The One is a being with similarities to the Ultras.

The One appears to be a large reptilian being with typical energy powers. Unlike most kaiju, the One can merge with sentient beings and control them almost immediately. The One takes in other beings and slowly transforms into stronger forms. Taking in humans seems to help the least. Less sophisticated beings like animals will dramatically increase his form. However, if his additions are removed properly, the animals will be released. He is similar to the Kaiju Bemular but is hunch-backed with more spines and horns. His appearance would later used in the design of further Space Beasts such as Galberos, Nosferu, and Lizarias.

The Space Beasts were a form of life that were a great nuisance in the Scorpio Galaxy. While they had always been kept in check by the giant of light, Ultraman Noa, many planets feared them. On one such planet, a race of highly intelligent beings sought permanent protection against them. To this end, they created a copy of Noa called Zagi, but the experiment ended with the birth of a giant of darkness. To rid themselves of this evil, they caused their own sun to go supernova, lighting up the entire galaxy with its destruction. However, though the Space Beasts were destroyed, their genetic compound was sent to a distant world by the light of the explosion. Due to their nature and Beast Wave (their means of communication, a signal that goes off when they become active), the particles gain a sort of consciousness and were aware that their ancient enemy, Ultraman Noa, would be after them.

The first Space Beast to appear on Earth, the One came to Earth in the form of a ball of blue light. Resting in the Pacific Ocean, it attacked an exploration sub sent to investigate the area it was last seen and killed everyone on board, save Udo, whom it took as a host, changing him physically and genetically as it withered away at his humanity. Taken back to a lab for interrogation, he absorbed lizards to transform into a lizard-like humanoid creature which escaped by slaughtering its way through anyone who dared to get in its way. Before leaving, he was shot by a poison bullet by Udo's former fiance Sara. Injured, he escaped thanks to an emotional moment of weakness.

The One then went on to slaughter an entire navy boat before being seen again. Remembering The One's prophecy of the other light, the government went after former First Lt. Maki, who had bonded with a red light but clearly still retained all of his humanity. Using him as bait, the government agency attracted the beast to an ambush and fired upon him using more poison rounds, but the One had adapted and called and absorbed a swarm of lizards, transforming into his larger second form and swiftly killed the solders. When he was about to kill Sara, he was stopped by Maki, who transformed into the silver super humanoid code-named the Next. Though evenly matched and the Next collapsing under the strain of his imperfect merger, the One was ultimately forced to retreat.

From there, he went to Shinjuku, where he fed on humans to increase his power in secret in the under regions of the city. Eventually confronted by Sara and Maki, the One played with her emotions by feigning an amnesiac Udo, before revealing his true nature and fighting Ultraman again. This time, the hero had more experience with his powers and easily bested the kaiju. Desperate and clearly outmatched, the beast absorbed a swarm of rats, taking on his colossal third form and bursting through the ground to terrorize the city above. Eventually noticing the hero propping up a building, the One fired at him, starting a battle that eventually led to the hero taking to the air. Unable to fly, the One summoned and absorbed a murder of crows to gains wings and continue his battle in the sky. Eventually, the Kaiju began to attack the town, killing hundreds and forcing the hero to take the brunt of his assault.

Again, it seemed like Ultraman had reached his limit and was about to fall from the villain's attacks, until Maki completely merged with the being of light and attacked the Kaiju again. The Beast put the hero in a hold while he began to drain his energy. Interrupted by a squadron of jet fighters, the One was forced to release his enemy who cut off his wings with the Lambda Slasher, releasing the crows and leaving the Space Beast to fall to the ground, where Next used his Evol-Ray Schtrom, destroying the One and reducing him to a cloud of blue particles.

The battle between The Next and The One, dubbed as the "Shinjuku Disaster", was erased from the minds of the public by the TLT through the use of Lethe. The event was rediscovered by the Night Raiders as Sara Mizuhara presented the recording of the battle to them. It is revealed that The Next made a horrible mistake by simply decomposing The One into particles, which then became the basis of the Space Beasts fought by Ultraman Nexus and the Night Raiders. Although memories of Beast the One and The Next were erased, Lethe's destruction (or rather Dark Zagi's revival) would eventually undo the effect.

Base Form
Originally an unknown, unseen form before his merger with Takafumi Udo. The military described it simply as a blue light. Its appearance was later portrayed in the Ultraman Nexus Booklet that came with the DVD.

The first form has done the least absorbing of all other forms. It is meeker than other forms appearing as a normal person but mutated with scaly and spiky skin, fangs for teeth and sporting claws, making it a dangerous foe regardless.

Udo transforming into his true form

Absorption
Idorobia
The second form, Idorobia (イドロビア Idorobia), is bigger, with a more reptilian appearance and form and gaining a tail, standing a foot taller than the average person. It still retains a human-shaped head and eyes. It was achieved after absorbing sea creatures, hence its motif of gills, tentacles and sea anemone.

Absorption
Reputiria
After absorbing more lizards, the One acheived his third form, Reputiria (レプティリア Reputira). It has fewer human features and sports a blue and flesh color scheme.

Absorption
Beruzebua
This form, Beruzebua (ベルゼブア Beruzebua) replaces the previous color scheme with a dark brown color. It was achieved by absorbing rats. It was around fifty meters tall with rat heads on its shoulders and twin blades on its arms. It can now spit blue plasma balls.

Absorbtion
Beruzebua-Korone
Like the previous form, after absorbing crows, the rat heads were replaced by crows and the lower back spikes were turned into wings which it used to fly, gaining the name Beruzebua-Korone (ベルゼブア・コローネ Beruzebua Korōne).

Thick Hide
Imperfect Beruzebua
After getting his wings sliced off by the Next, the One was forced into this imperfect Berezebua form that had no additional animal heads on its shoulders. It only appeared briefly before being finished off by the Next's Evol-Ray Schtrom.

In the 2016 novel (which retells the ending of Ultraman), The One was the first monster to emerge from Clone Bullton's temporal worm hole. It first appeared in the form of a single small cell which rapidly grew into Beruzebua Korone by seconds. Ide and Inpei Seant would sent the Giant Soldiers to fought against Beast the One with much gunfire before destroying it with Mars 133. To prevent the Beast Cells from spreading (and creating more Space Beasts), they generated a force-field around the monster and contained themselves. 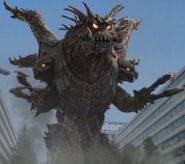 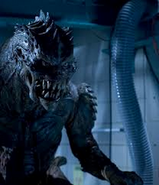 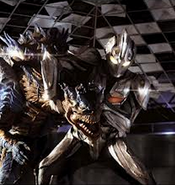 Ultraman the Next vs. Beast the One

Beast the One in a stage show.