Still Active
The Beam Flasher (ビームフラッシャー Bīmu Furasshā) is a device used to transform into Ultraman Joneus and was used by Choichiro Hikari. It was given to him by Ultraman Joneus himself.

The Beam Flasher is used by the people of U40, particularly those who travelled to distant stars and required a host to blend in on that planet. The dissidents of the Hellar Fleet do not have any since they were cut of from the Ultra Mind and therefore do not posses Ultra Forms. Choichiro's was the same used by Ultraman Joneus, upon the two merging in space, Choichiro had the device on his belt, although he was mostly unware of it until a colleague pointed it out. It was later during the first battle of the series that he figured out the secret of the object. Later at the end of the series when Joneus and Hikari separated, Joneus returned home with his transformation device.

The user places the Beam Flasher on their forehead to transform. Several times before hand the user will hold it up and charge it with energy, presumably from the Ultra Mind before use. The rise scene is just the user morphing into their Ultra counterpart as various lights flash around them. 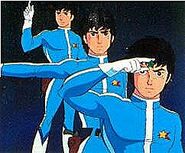