Beacon (ビーコン Bīkon) is a Kaiju that first appeared in episode 21 of Return of Ultraman.

Beacon was a UFO-like space monster with powers as bizarre as his appearance who first made himself known stalking a plane from within the cover of clouds. Strangely, the plane was seen by many on television at the same time, despite no cameras being present. Those watching soon saw the plane explode. MAT soon went to investigate the mysterious destruction of the plane, picking up something on their sensors, soon discovering Beacon. The strange creature stayed mostly hidden in the clouds but soon approached his prey, his presences disrupting their sensors and radios. They fought back, firing on the monster, but only to be attacked back by its eye beams. Finding this prey not worth the hassle, Beacon retreated back into the clouds.

Later that night, another TV signal occurred, this time two planes were distracted by an aurora, causing them to crash into one another. MAT once again arrived, attacking Beacon, this time the fight being broadcasted as well. Beacon was unhurt and returned fire with his eye beams, the agile fighter dodging his attacks. Beacon finally struck them with his energy beams, forcing them down, the transmission ending. MAT launched once again in an attempt to end the flying beast’s threat to air traffic. However, the Kaiju finally decided to descend from the skies, hovering over the city, finally ramming through several buildings as he landed. Beacon began crawling through the city, destroying everything in his path.

MAT soon arrived, attempting to put the creature down once and for all but as in the air, their weapons were powerless as it rampaged towards a house containing one of Go’s friends. Go was buried in rubble, once more forcing Ultraman Jack to come forth. Jack threw Beacon, only for the monster to fly back around and ram him. The monster dodged and countered with his energy beams. Jack tried a flying kick but was knocked backwards. The alien Kaiju tried to charge him but was kicked back landing on his feet. Jack tried the Spacium Beam but the monster's eye beams countered it. Beacon's speed overwhelmed the Ultra and let Beacon pin Jack down. Beacon bit down on his chest, seemingly defeating him. But Jack suddenly sprung to his feet after playing dead for several moments to take Beacon off guard, throwing the Ultra Spark. Beacon was struck through the head, the Ultra Bracelet coming out his back. Beacon soon collapsed to the ground dead, his reign of terror over at last.

As recalled in Ultraman Taiga's past, a modified variant called Re-Beacon (改造ビーコン Kaizō Bīkon),[2] who was outfitted with a laser turret, was one of the members of Gua Army's Mechanized Monster Army under Imbiza's leadership. Alongside Re-Alien Iyros and Re-Zaragas, the three were commanded by Imbiza to attack Andro Ares through salvo firing, but the Andro Super Warrior dodged through the attacks and used his Cosmo Magnum: Twin Edge Mode to slice through all three cyborg monsters. For Whom Is That Fist For - Part 2

Beacon first appeared in episode 36 where he fought Redman alone where the monster held the distinct disadvantage against the hero. After he got killed after being judo throwed and chopped on the head three times, Sartan showed up to challenge Redman and Beacon eventually got back up and joined forces with the other monster but both monsters eventually lost after being thrown onto their backs thanks to Redman's judo throw.

Beacon reappeared in episode 38 where he, at first, fought Redman alone while switching places with Nokogilin via teleportation. They eventually decided to fight together but they were no match for the hero even though they had the team advantage and were eventually killed with Red Arrows to the chest.

In episode 39, Beacon fought Bemstar at first, but when Redman showed up, they disappeared and reappeared behind him and began to fight him. After a long, evenly matched fight, Redman defeated both the monsters by throwing them to the ground, exploding afterwards

Beacon reappeared in episode 40 alongside Sartan to fight Redman, but when wanted to fight, Sartan insisted he go first, but, after a while, he let Beacon join in on the fun. After Sartan was defeated by Redman, Beacon fought the hero alone until he was defeated by the Red Fall.

In episode 41, Beacon once again teams up with Sartan and shows up after his partner ran to meet his sparring partner. After a long, evenly-matched fight, Beacon gets killed by getting stabbed in the back a couple of times by the alien's Red Knife.

Beacon reappeared in episode 122, where he teamed up with Sadola to take on Redman. When he and Redman ran towards each other, the former somersaulted to dodge the Red Arrow thrown by the latter and then teleported up to the top of a hill where he joined up with his monster partner then went back down while Sadola went down to join him later. While the alien hero managed to hold his own against both monsters, they had the upper hand in the fight by dodging and countering his moveset. Nonetheless, Redman didn't give up and eventually, he killed Beacon by stabbing him in the head with his Red Knife and defeated Sadola soon afterwards.

In episode 124, Beacon rolled down a hill while his partner, Alien Icarus, was dealing with Redman. He then joined him in the fight against the alien hero and together, they managed to give the savior a hard time in battle but the alien hero managed to hold his own in the fight, leading to both sides being evenly matched with each other. In the end, he killed Beacon by stabbing him in the chest with his Red Arrow and Icarus would soon follow.

Beacon reappeared in episode 126, where he teamed with Alien Bat and Sadola to fight Redman. The three monsters duked it out with the alien hero at the cliffs and the advantage over him due to their brute force and overwhelming teamwork. All four of them then got into a ditch and climbed back out eventually to continue the fight. During that time, Redman managed to hold his own against all three monsters and eventually he defeated them all by firing a Red Shot from his Red Knife.

In episode 127, Beacon teamed up with the same monsters from last time to take on Redman. They started their fight on top of a hill but then Redman sent them tumbling down and they resumed their fight at the bottom. Even though the monsters had the team advantage against him, the alien hero managed to hold his own against the trio much better than last time with his usual moveset and successfully defeated the three monsters by jumping up to the top of the hill and threw his Red Arrow at the monsters and they got knocked out by the explosion from that said weapon.

Beacon made his final appearance on the show in episode 136, where he joined his partner Gudon at the top of a hill to battle Redman. Unfortunately for the two monsters, Redman debuted his newest trick, separating himself into two, and they fought the monsters together, leaving the fight evenly matched in combat. In the end, the two Redman clones killed the monsters by slashing them with their Red Knives simultaneously, with explosions, before the two clones merged back into one.

Beacon reappears in episodes 99, 100, and 103 of Ultraman Retsuden, having been used by Ultraman Belial and the Darkness Five to hijack the show from the heroes. He is accidentally defeated by Sly after he throws an energy blast at Belial. Belial dodges the energy, but it comically strikes Beacon instead. 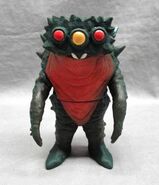 Miniature figure of Beacon, by Bandai. 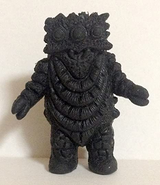 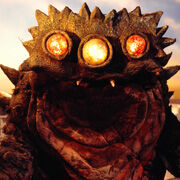 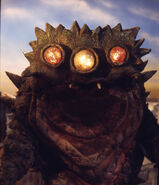 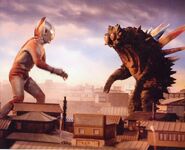 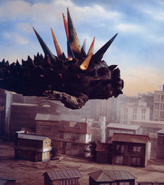 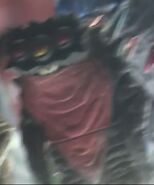