Ultraman Trigger: New Generation Tiga episode 20 "The Blue One Comes With the Lightning"
Barriguiler (バリガイラー Barigairā) is a Kaiju that first appeared in Ultraman Trigger: New Generation Tiga. An otherwise-benevolent monster who typically refrains from conflict, Barriguiler was unwittingly recruited by Hudram into his latest plans to capture Yuna Shizuma, as the monster couldn't resist assisting the evil Ultra when the chance of receiving his favourite food was on the table. After Hudram's schemes were foiled yet again, Barriguiler left without further incident, though he inadvertently caused Aboras and Banila to awaken in the present day.

Long ago, Barriguiler fought against Yuzare and lost. In the present day, Hudram summoned Barriguiler to the Earth to get him to capture Yuna Shizuma, who has awakened Yuzare's power within herself. Barriguiler was hesitant at first because of his past defeat, but Hudram bribed him by saying that if Barriguiler succeeds, he would be gifted with a thousand years' worth of Planet Kisaragi Comet Buns, his favourite food. Clearly won over by this offer, Barriguiler turned into a giant and went on a rampage, calling Yuzare out to fight him, but he was faced by Ultraman Trigger instead. They wrestled in a sumo match where Trigger Power Type was winning at first, until Barriguiler decided to play dirty by imprisoning Akito Hijiri in his bellybutton prison. Trigger then struggled to fight back and was put in a bind by Barriguiler, though he avoided the beastman's attacks.

Yuna then appeared riding on a flying broom made using Guebasser feathers, given to her by Ignis. Barriguiler imprisoned her and let Akito go, but he still wanted to fight Trigger. Yuna received Yuzare's memories of her and Barriguiler's battle in ancient times, and used them to convince Barriguiler that Hudram lied to him, saying that Hudram's goal was to reach the Eternity Core and use its powers to plunge the entire universe into a void of darkness. Barriguiler then turned against Hudram, and fought him with Trigger's help. After Hudram and Glitter Trigger Eternity's beams collide, Hudram escaped and the battle was over. Barriguiler apologized for what he did and left in a thundercloud, hoping that he and the humans would get along someday. The Blue One Comes With the Lightning

During the fight, a wayward shot of Barriguiler's lightning struck the capsules containing Aboras and Banila, freeing them from their imprisonment of 350 million years. Demons Rampage Again 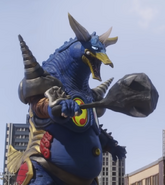