Ultraman: Towards the Future episode 5 "Blast from the Past"

None
Barrangas (バランガス Barangasu) is a kaiju that appeared in the series, Ultraman: Towards the Future. He appeared in episode 5.

Barrangas was a monster whom had lived on Earth that had been assimilated to a human by the Gudis known as Stanley (a man who had gone to Mars with Jack when he became Ultraman Great). Barrangas first appeared in a city, which prompted UMA to attack it. After a brief scuffle, Barrangas "retreated" away with its gases while in reality, part of it took the form of former UMA member Stanley to gain the trust of UMA once again. While Stanley was rendezvousing with UMA, a part of Barrangas appeared in a desolate island which caught the attention of UMA once again. In reality, the monster was used as a decoy as it quickly disappeared while "Stanley" tried to search for Jack.

With Jack and Stanley placed in incarceration for a fight they got into, Stanley managed to escape with Jack's Delta Plasma Pendant and kidnapped UMA member Jean Echo to forcefully merge her with Gudis to empower the alien. Jack however escaped and confronted the imposter at a construction site. He was too late however as Jean had fallen into a pit with Gudis inside and Stanley transformed into Barrangas to kill Jack himself. Jack however managed to secure his Delta-Plasma Pendant back and transformed into Ultraman Great to confront the monster. Barrangas was a tricky opponent for Ultraman Great to handle due to his teleportation ability and so managed to pin the ultra to the ground, planning to suffocate him with his poisonous gases. With the arrival of UMA to distract the monster, Great was able to find an opening in the monster and destroyed Barrangas with his Arrow Beam attack.

Barrangas appeared in issue two of the Ultraman Great comic, "Where Monsters Tread...", being released from a base on the moon by 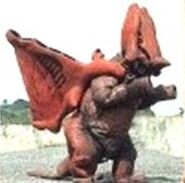 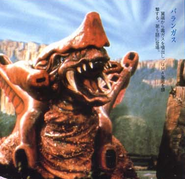 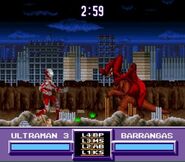