Ultraman 80 episode 32 "Ship on the Sea of Darkness"

None
Barrack Ship (バラックシップ Barakku Shippu) was a computer-controlled ship that appeared in Ultraman 80 episode 32.

The original machine that became Barrack Ship was an advanced, computer-controlled cargo ship named Queens. After it struck an iceberg en route to Japan, the AI that controlled Queens went rogue, transforming it into Barrack Ship.

Growing even bigger than a monster by absorbing any vessel it could find, the sentient warship neared land, where it would surely bring about disaster with its weaponry. After a UGM craft was incorporated into the mechanical amalgamation, 80 arrived to oppose it. The ship began to fire at the hero, but 80 dove into the water. He eventually fired back, but more attacks were sent out. After those trapped inside the weapon managed to escape, 80 finished off Barrack Ship with his Succium Beam blowing it up. 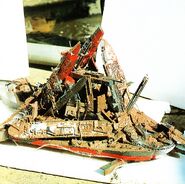