None
Baranda V (バランダーV Barandā Bui) is the first robot that fought Fireman. He appeared in episode 10. It is also known as Varander V.

The manually controlled Alien Baranda robot, created in an attempt ​​to destroy Tokyo, Baranda V quickly began to create chaos with in Tokyo. Not long after it began to point its guns at the public Fireman arrived to destroy it, but the hero was quickly weakened by Baranda V's chest gun. With their hero down SAF attacked Baranda V and successfully destroyed its chest gun. Fireman soon came back to the action but was easily beaten around the city. Soon Fireman forehead warning light began to blink, with little time left Fireman quickly obtained the upper hand in the fight. Seeing he was defeated Alien Baranda tried to control Baranda V off of earth, but Fireman fired a Fire Flash at Baranda V, which incinerated both it and the Alien Baranda. 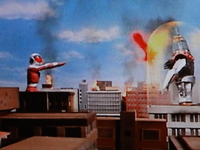 Force Field
Add a photo to this gallery 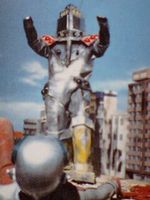 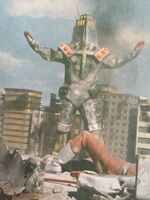 Add a photo to this gallery
Retrieved from "https://ultra.fandom.com/wiki/Baranda_V?oldid=525429"
Community content is available under CC-BY-SA unless otherwise noted.