Baragon (バラゴン, Baragon) is a subterranean Kaiju that debuted in the 1965 film, Frankenstein vs. Baragon, and was subsequently absorbed into the Godzilla franchise. Baragon's suit was utilized to portray several Kaiju in Tsuburaya Productions' series, Ultra Q and Ultraman.

Baragon was first seen in Toho's 1965 film, Frankenstein vs. Baragon, where he fought and lost to a giant version of the Frankenstein monster. The floppy-eared dinosaur became a beloved monster in Japan, despite his single film appearance. By 1966, Toho had no major plans for Baragon, but Tsuburaya Productions had major plans for the underground saurian.

During the production of Ultra Q in 1966, Eiji Tsuburaya made it no secret they were using suits from the Toho studios, even Godzilla himself appeared as the very first Ultra Kaiju. As the show continued, Tsuburaya wanted Gomess to return, but due to the suit being sent back to Toho, the executives sent Baragon's suit to the Ultra Q set. This marked the first time Baragon became one with the Ultraman Series, becoming the monster Pagos.

As Pagos appeared and was destroyed in his titular episode, Tsuburaya had plans to revive the monster and have him fight others such as Garamon, Kemur, and Peguila, but the plans were never executed. As Ultra Q ended, Baragon's suit sat in Tsuburaya's warehouse.

As the Ultra Q series finished, Baragon's suit was hauled out of storage for the third episode of Ultraman, gaining a new head, a yellow coat of paint for his back, and a green fin on his rump, Baragon was christened the Invisible Monster Neronga. Neronga was a one off monster, destroyed by the titular hero's signature attack, but this wasn't the end of Baragon's career.

The next time Baragon's suit was reused was during "The Lawless Monster Zone" episode where it was used for the Underground Monster, Magular. Magular's screentime was brief, being dispatched by a simple well-placed grenade from the Science Patrol, and the monster never got to even fight Ultraman or the villain of the episode, Red King.

The final time Baragon was dragged out of storage was when Tsuburaya planned to revive the monster Pagos for a Uranium-based episode. However, Pagos' head was butchered to create the head of the dragon horse Dodongo, so Tsuburaya decided to just reuse the Neronga/Magular head. Removing the spikes of Magular and using six giant silver petals to hide the seam around the neck, Gabora was born. After its use as Gabora, the suit was reverted back to Neronga for public appearances, lacking his antlers.

As the filming of Ultraman was done, Baragon's suit, damaged, paint smeared, and well-worn, was meant to be revived as the monster Pagos, once again, for Eiji Tsuburaya's next series, Ultraseven. However, plans of Pagos' revival where greatly changed as was his fight with Capsule Monster Windom. Windom was replaced by a new monster, Agira, and Pagos was completely re-written into the monster Rigger, so Baragon's suit remained in the Tsuburaya warehouse for two years, gathering dust and mold. It wasn't until 1968 that Toho remembered how popular the pug like dinosaur was, and contacted Tsuburaya, requesting the suit back.

Baragon however appeared as a toy fighting a toy Red King in Return of Ultraman epiosde 7.

Back Home at Toho

Baragon returned to the silver screen in Toho's then-planned final Godzilla film, Destroy All Monsters. However, due to the expenses of the new Godzilla, Anguirus and Rodan suits, the new Manda and Mothra puppets, and repairing King Ghidorah's suit and Kumonga's puppet, some of the monster's promised attention was drawn from him. Toho didn't even have time to repaint the beast back to his rustic red brown color. Ironically, the fabric used to cover the suit's chest during it's time at Tsuburaya slowed the deteroation down immensely, and only a new head had to be constructed.

With a completely new head, the monster appeared on a small monitor in Monsterland, promotional photos, and briefly during the film's final battle and ending sequence. Baragon was originally planned to attack Paris in the film and destroy the Arc de Triomphe, but Toho was forced to replace him with the monster Gorosaurus, whose suit was still relatively new. Gorosaurus is still referred to as "Baragon" in the scene however.

And thus ends the history of Baragon's role in the Ultra franchise. His likeness and role in the Ultraman Series would not be forgotten though, as Geronga appeared in Ultraman Max's tribute to Ultra Q's Pagos, as well as Neronga from the orgiinal series. Baragon himself has continued to appear in media related to the Godzilla franchise over the years, and was even featured in the film Godzilla, Mothra and King Ghidorah: Giant Monsters All-Out Attack in 2001, though barred from the title.

Baragon makes his only crossover with the Ultraman series, officially, in the 1993 Famicom exclusive, Battle Baseball, part of the Compati Sports Series that has crossovers between Toho, Tsuburaya Productions, Toei, and Bandai Namco. Baragon is part of the Godzilla centric team, Godzilla Megapowers. 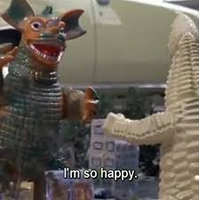 Retrieved from "https://ultra.fandom.com/wiki/Baragon?oldid=522470"
Community content is available under CC-BY-SA unless otherwise noted.