In use
Baradhi (バラージ Barāji) is a mysterious and mystical power in the Ultraman Series that has made a few appearances throughout the franchise. It is also the name of the ancient city in the episode where it was first mentioned. In general, the power of Baradhi is contained within an unusual Blue Stone, which possesses mystical qualities and holds a great deal of energy.

The Blue Stone of Baradhi (バラージの青い石 Barāji no Aoi Ishi) made its first appearance in Ultraman episode 7, where it was given to the humans by an Ultraman in the past, who was called the God of Noa (ノアの神 Noa no Kami). The figure made a prophecy to the humans that an unbeatable enemy would show up, and indeed it did in the form of Antlar, who Ultraman could not defeat. When the stone was tossed at it, it died instantly, showing that the stone had great power.

The Blue Stone of Baradhi appeared once again in Ultraman Max, episode 11, to effectively serve the same purpose, only this time it weakened Antlar instead of killing it immediately.

In Ultraman Zero The Movie: Super Deciding Fight! The Belial Galactic Empire, there was a Shield of Baradhi (バラージの盾 Barāji no Tate) left behind in ancient ruins. This is the first time a "Baradhi" artifact was intricately and explicitly tied in with Ultraman Noa. The shield was shown to resonate with the hope of all those present in the final battle against Ultraman Belial, creating a phenomenon known as a Nexus of Souls and bringing forth Ultraman Noa, who appeared to Ultraman Zero in a dream-like sequence, only to give him the Ultimate Aegis, the true form of the Shield of Baradhi, so that Belial can be defeated.

In Ultraman X The Movie: Here He Comes! Our Ultraman, it was simply called a Blue Stone (碧石 Hekiseki), and kept the Kaiju Zaigorg sealed in the Baradhi Ruins (婆羅慈遺跡 Barāji Iseki), which also had a stone statue of Ultraman Tiga. During Zaigorg's attack on the city, the stone resonated with Yuuto Tamaki's Sparklence to restore the X Devizer. It later turned into an interdimensional Travel Sphere to summon Ultraman.

The stone was stolen by Dada in Ultraman Taiga The Movie: New Generation Climax, but was retrieved shortly afterward.

God of Noa and the Blue Stone in a parchment, from Ultraman Max 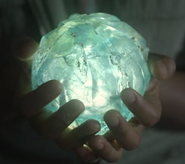 The Blue Stone in Ultraman X the Movie
Community content is available under CC-BY-SA unless otherwise noted.
Advertisement