Barabba (バラバ Baraba), also known as Varava[1], is a Choju from the TV series, Ultraman Ace. He first appeared in episode 13 and was later killed off by Ultraman Ace in by the next episode. It was created by Yapool via combination of a space monster and the larva of a swallowtail butterfly.

Barabba was one of Yapool's choju that Yapool had specifically planned to be used in his latest effort to kill Ultraman Ace. Barabba's attack was first felt upon the older brother of a young boy, killing him. Later, Ultraman Ace was called into action by an Ultra Sign by the Ultra Brothers, who were on their way to investigate the planet of Golgotha. As Ace left to join his garrison, Yapool released Barabba onto Earth, who quickly went into smashing cars, buildings, and whatever laid in his path, with only little opposition in the form of TAC. It was also soon discovered that the investigation on Golgotha was a trap to kill the Ultra Brothers by Yapool, while Ace managed to escape thanks to some convincing, Ultraman, Zoffy, Ultraseven, and Ultraman Jack were crucified on the planet. He returned to Earth afterwards and face the same monster but the tide of the battle was in Yapool's favor, who threatened to bargain the Ultra Brothers' lives if his Choju killed, forcing Ace to admit defeat and revert to his hosts.

The next day, Barabba returned to the city he attacked with his only opposition being TAC, leaving the tide of battle, one-sided. Once Ace recovered, rescued the Ultra Brothers, and stopped Ace Killer he returned back to Earth to settle business with Barabba. Barabba tried to kill Ace by shooting his Sword at the Ultra, but Ace caught the sword and threw it back, impaling Barabba through the torso. Ace then rushed forwards, and delivered a blow to the back of the beast's head, dislodging its eyes and leaving the monster dashing about in intense pain. Ace then dislodged Barabba's ax-hand, caught it, and charged, slicing the Choju's head off as he rushed past. Amidst great cheering from TAC and civilians, Ace flew off to recover.

Barabba participated in the Dark Spark War fighting alongside various monsters against Ultras until he was turned into a Spark Doll by Dark Lugiel. He was first seen as a Spark Doll being dug by Hikaru Raido after detecting him with the Ginga Spark. Alien Icarus then stole the Spark Doll after Hikaru gave it to Misuzu Isurugi. Icarus then DarkLived himself as well as Barabba, Red King, Seagorath, King Crab, Bemstar, and Hanzagiran to form Tyrant. After Tyrant was defeated by Hikaru as Ultraman Tiga and Tomoya Ichijouji as Jean-Nine, all of the monsters, including Barabba, were turned back into Spark Dolls and were the collected by Hikaru and his friends.

―DarkLive announcements for Barabba and other Spark Dolls as Tyrant via the Dark Dummy Spark.

Barabba became a Spark Doll in the conclusion of the Dark Spark War due to the Dark Spark's powers. His Spark Doll was found by Alien Icarus and used to re-create the the kaiju Tyrant. Eventually, all of Tyrant's sets of Spark Dolls claimed by Hikaru when said monster defeated. After Dark Lugiel's defeat, Barabba was freed from the curse the befell him and along with other former victims, returned to their home worlds.

Barabba was released once in the Ultra Monster Series. He is 5.5 in tall and has 3 points of articulation. His coloring is off a little because he is black with a blue belly highlight and is pink and purple on his head. In 2013, he is released as part of the Ultra Monster 500 series. He is 5 inches tall and has a more accurate color design to him and is #18 in the series. 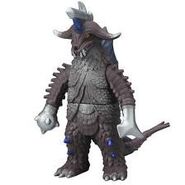 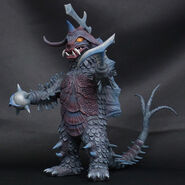 Barabba X-Plus
Add a photo to this gallery 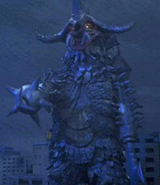 Barabba is impaled with his own sword

Ace hits Barabba, causing his eyes to burst out of their sockets

Barabba running around after his eyes burst

Ace slashes Barabba with the mace 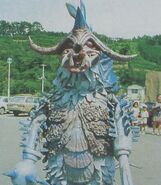 Barabba Behind the Scenes

Retrieved from "https://ultra.fandom.com/wiki/Barabba?oldid=423435"
Community content is available under CC-BY-SA unless otherwise noted.