Bao-on (バオーン Baōn) is a monster that appeared in the TV series, Ultraman Dyna. He appeared in episode 8.

Bao-on was an alien monster who arrived to Earth in a meteor. After landing by a mountainside near a village, Super GUTS arrived on the scene to investigate the mysterious event of people randomly falling asleep nearby the village. Bao-on finally arose once the townspeople awoken and quickly put them and Super GUTS back to sleep with his sleep roar. Despite Bao-on visually harmless nature, he was still a nuisance and threat to the village because of his sleeping waves and Super GUTS tried to apply several tactics to try and lure the monster away from the village. The first attempt involve luring Bao-on away with a red balloon (the color, red greatly interests Bao-on) and restraining him with cables to his leg, which only managed to slow him down. Super GUTS then tried to quiet the monster by placing a muzzle-like mask on the monster, only for Bao-on to tear it to pieces upon seeing it.

The next morning, Bao-on discovered another red balloon and started following it as it was leading him towards the city. Super GUTS then took the offensive and attacked Bao-on with laser and tranquilizers, but this only frightened Bao-on back into the village from before. Ultraman Dyna quickly arrived just as Bao-on was about to (unintentionally) crush the scientist, Mustafa, who was helping Super GUTS, Ultraman Dyna appeared and tried to hold off the monster by turning into Strong Type to lure him away from the village, but Bao-on's natural strength and Sleep Waves made him a difficult task for Dyna to stop him. Realizing Bao-on was not an aggressive monster, just a misplaced one, Dyna reverted into Flash Type and created an Ultra Balloon to distract Bao-on as he carried the monster back into space, where he wouldn't cause trouble for Earth again. 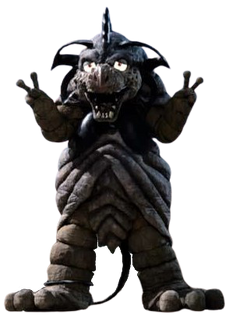 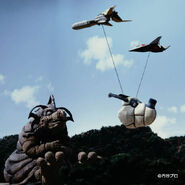 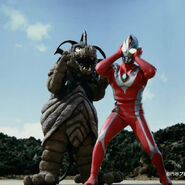 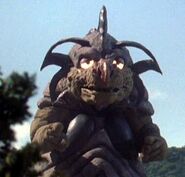 Bao-on in a promotional magazine