Unknown
Banpira (バンピーラ Banpīra) is a spider-like monster from the TV series, Ultraman Nexus. It appeared in episode 29.

A spider-like space beast that took a home in the mountain regions of Japan, the creature began to stalk and hunt human prey in the fog it created, and erase the memories of those that seen it. As word of a memory erasing creature began to spread, the Night Raiders began to suspect a beast was behind the missing persons. They sent in a team in to investigate, and in the thick fog, Komon discovered the creature and lifted a portion of the fog with a special energy round.

The monster began to attack and lashed out with its webs. Holding Komon in the air with its webs, the beast prepared to feed until Nexus arrived, saving the human. The giant hero lashed out with his own attacks, but Banpira refused to die. The Night Raiders were ordered to aid Ultraman and aided the hero with their own attacks, but the monster began to spew out a thick fog and managed to burrow away.

It had escaped, but the organ it used to create the fog was damaged. The creature soon emerged from the ground and was heading directly for the city. Ultraman Nexus was called forth again and summoned the Meta Field. Inside the field, Nexus escaped its webbing and managed to finally kill it with a shot of his Arrow-Ray Schtrom.

Banpira attacked ZAP SPACY while they were investigating a life signal in the ruins of Belargo. Rei quickly unleashed Gomora and the two battled. Banpira managed to land a few blows, but they were shrugged off by the horned beast whom quickly retaliated by firing his destructive Super Oscillatory Wave into Banpira's body, completely vaporizing the Space Beast.

Banpira reappeared in the movie Mega Monster Battle: Ultra Galaxy Legends The Movie, as one of Ultraman Belial's 100 Monster Army. He was first seen rising out of the ground of the Monster Graveyard along with Eleking, Red King, Gudon, King Guesra, Hoe, and Tyrant. He then teams up with Eleking, Verokron, Fire Golza, King Joe Black, Doragory, Nova, King Pandon, Gan-Q, Alien Guts, and Alien Metron to take on Ultraseven. He was defeated when Ultraseven flipped him over with his herculean strength. 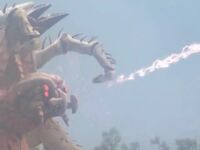 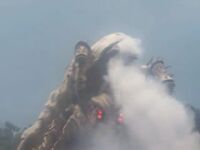 Fog
Add a photo to this gallery

Banpira reappears in episodes 10 and 11 of the series, Ultra Zone.

Banpira appears in a segment of the show that retells the events of episode 8 of the original Ultraman known as "Clandestine Suflan Island". Unlike the original episode, however, it is an expedition group that journeys to the island, also Red King battles the monsters Birdon and Banpira. 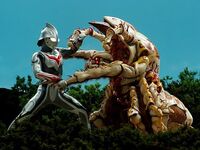 Banipra fighting Seven
Add a photo to this gallery
Retrieved from "https://ultra.fandom.com/wiki/Banpira?oldid=510264"
Community content is available under CC-BY-SA unless otherwise noted.