The intelligence of a sun manifest, Banderas was the sun of a solar system that bore his name. Reaching the end of its life, the sun sought to extend its time by feeding on minus energy. To this end it came to Earth as Banderas, its manifestation. The sun being began his operation in a small farming village, causing the appearance of gold. He began absorbing the minus energy of the people's greed when it became great enough, feeding him.

He was eventually interrupted by Ultraseven, an Ultra and therefore a being of light. This caused Seven to be void of the minus energy that allowed Banderas to control the humans, so the sun alien set the people to kill Dan Moroboshi. However when that failed, and his Stargate discovered, he pleaded saying that the life forms of his system needed him.

Banderas was left alone by Seven but the Ultra Guard was ordered to destroy the Stargate for the safety of Earth. While Satomi was hesitant to destroy the Stargate with her bomb, Dan reappeared, he had ventured to the Banderas system and had found that its native civilization(s) had long since left. Angry, Banderas transformed and fought Seven. When his Stargate was destroyed Banderas managed to hold off Seven, but lost when the Ultra stuck his Eye Slugger into his top eyes. He was frozen and taken out into space where he was destroyed. 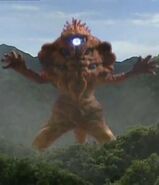