"I will dominate both Computer World and your pitiful world! Destroy them, Bamora! And reprogram the computer to create a warp device! Break down the walls of dimension!"

Gridman the Hyper Agent episode 2 "The Secrets of Acceptor"

When Khan Digifer sees that Takeshi has a bad day at school, he puts him under his control to make use of his hatred. He then commands Takeshi to make him a monster, so Takeshi creates an animated sprite of a Kaiju that is strong and swift. Khan Digifer gets Takeshi to hack into the computer system of Sakura University so they can reprogram it into a device that connects the computer world to the real world. Khan Digifer then brings the animated sprite to life, giving birth to Bamora. After being sent to the college computers, Bamora sets up a barrier in front of the passroute and starts rampaging in the computer world. When Naoto and his friends hear about this from Gridman, Naoto merges with him and they head toward the college computers. Unfortunately, Gridman ran into the barrier and cannot get through. While Yuka and Ippei send a bunch of password hacking programs to break the barrier, Bamora creates a warp device that Khan Digifer activates to connect the computer world to the real world. Once an opening to the real world appears, Bamora starts to head out to rampage on humanity. When Ippei and Yuka manage to weaken the barrier, Gridman breaks through and prevents Bamora from going into the real world. The two fight each other where Gridman breaks off Bamora’s head appendages and manages to use Grid Beam to delete Bamora. Gridman then uses Fixer Beam to reprogram the warp device and close off the opening to the real world.

Bamora's data was later upgraded into Mecha Bamora (メカバモラ Meka Bamora) with armor and a mace on both its left hand and tail. Takeshi had a bad experience with the police one night, to get even, Mecha Bamora disabled police communications and jail cells. The police managed to recapture all but one of the escaped criminals. The loose convict took refuge in the gang's basement and held Ippei hostage with a gun. Naoto got the jump on the armed man, but the man fled after a brief struggle. Mecha Bamora was not as easy to fight like last time; it used it mace fist to block all of Gridman's laser blasts and its mace tail pummel the weakened hero. God Tank's rapid fire on Mecha Bamora's back gave Gridman the chance to form Thunder Gridman and perform the Thunder Grid Beam. With communication restored, Ippei and the police recaptured the runaway criminal. 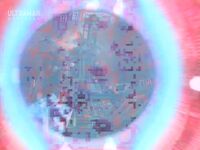 Mouth Beam
Add a photo to this gallery
Mecha Bamora 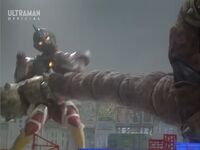 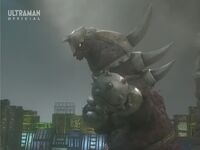 Spiky Ball (left hand)
Add a photo to this gallery 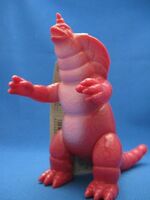 A figure of Bamora
Add a photo to this gallery 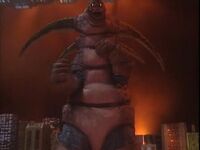 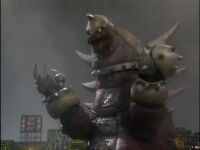 Add a photo to this gallery
Retrieved from "https://ultra.fandom.com/wiki/Bamora?oldid=540859"
Community content is available under CC-BY-SA unless otherwise noted.