Bakugon is a monster created by the dreams of a stressed man named Ikuta, who was going through relationship issues with his girlfriend. It was then his girlfriend grew distant from him, and loved another man, causing Ikuta to be filled with anger. When cosmic waves known as "Morpheus D" entered Earth's atmosphere, it slowly began turning the dreams of Ikuta about a rampaging monster into reality. Upon his first sighting, GUTS was on the scene, but Bakugon was not fully materialized and so GUTS' assaults passed through Bakugon until the monster disappeared. Even after medical assistance in the form of sleeping tapes and burning incense (which was sold by a doctor who was a fraud and the items were useless), the dreams did not stop haunting Ikuta and Bakugon was summoned again, this time in a more physical form to cause chaos. This time Tiga was called into action, but like GUTS before him, Tiga's assaults passed through Bakugon, leaving the dream monster completley unharmed.

After seeing his dream in the newspaper, Ikuta tried to warn his girlfriend, only to be informed by a woman who had moved into his house that she had moved away with another man. Enraged at his girlfriend for her affair and consumed by hatred, Ikuta deliberately went to sleep and this time Bakugon materialized into a physical form with color, causing destruction in its search for Ikuta's girlfriend, in hopes of killing her. GUTS returned on the scene to stop him but yet again, Bakugon's dream origins made their assault intangible and their efforts futile. Realizing the truth of Bakugon's origins, Daigo fled the scene and fell asleep. In his dreams, Daigo transformed into Ultraman Tiga and this time confronted Bakugon in the dream world. Now with the fighting chance, Tiga fought Bakugon to a standstill and finally managed to destroy the dream monster with his Timer Flash. Back in the physical world, Ikuta was arrested by GUTS for all the trouble he caused.

Intangibility and Heat Ray
Add a photo to this gallery 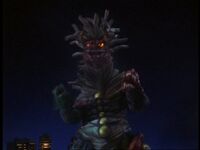 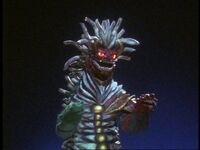 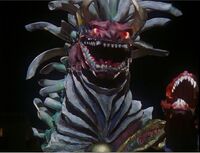 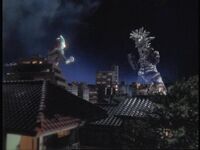 Add a photo to this gallery
Retrieved from "https://ultra.fandom.com/wiki/Bakugon?oldid=524842"
Community content is available under CC-BY-SA unless otherwise noted.