Ultraman Ace episode 31 "From Seven to the Hand of Ace"

Baktari was originally a tapir at a zoo named Baku-chan. One day, the tapir disappeared. The moment it disappeared, Baktari took its place. Baktari destroyed some of the city until TAC wounded the beast. Baktari disappeared and the tapir reappeared but this time, with a wound on its shoulder. At one point, the tapir acted strangely and disappeared again. Baktari, with a bandage on its shoulder, decided to spray some buildings with acid. The moment it disappeared again, TAC decided to kill the tapir via firing squad. Before it could be killed, the tapir turned into Baktari again and went on a rampage. Ultraman Ace came into the scene and fought Baktari. Before Ace could kill Baktari, a voice told him to bring the monster to space. And then appeared Ultraseven, using an Emerium Beam to turn the Terrible-Monster back into a tapir. Ace returned the tapir to Earth and there it would live out the rest of its life in peace in the zoo with Uncle Baku. From Seven to the Hand of Ace 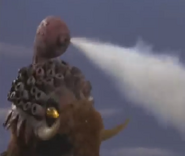 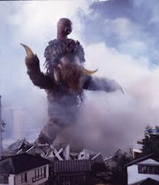 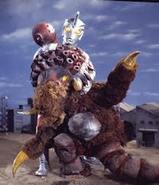 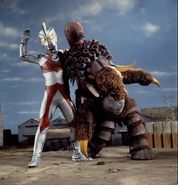 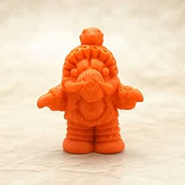