When King of Mons was winning in battle against Ultraman Gaia, he summoned forth the monsters Bajiris, from the back, and Scylla, from the chest, to assist him in the battle to triple-team the giant and turn the tide of battle even more. Together all three monsters triple-teamed Gaia and the battle became impossible for Gaia to win. Not giving up hope, Tsutomu found the Red Sphere and made one more wish to help Gaia. Granting Tsutomu's wish, Ultraman Tiga and Ultraman Dyna were manifested and came to assist Gaia against the three monsters. As Tiga fought with Scylla and Gaia fought with King of Mons, Dyna fought Bajiris. Both Ultra and monster fought to a standstill outside of Earth's atmosphere. However, Dyna eventually found an opening and destroyed Bajiris with the Empowered Solgent Beam.

Bone Wing
Add a photo to this gallery 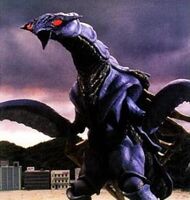 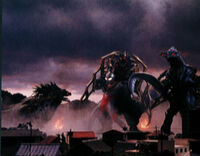 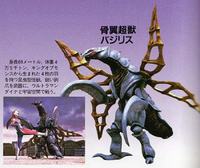 Add a photo to this gallery
Retrieved from "https://ultra.fandom.com/wiki/Bajiris?oldid=510253"
Community content is available under CC-BY-SA unless otherwise noted.