The☆Ultraman episode 21 "This is the Ultra Star! Part 3"

None
Bagon (バゴン Bagon) was a Kaiju that appeared in episode 21 of The☆Ultraman. It originated from the deepest part of space and was originally uncontrollable until the Baders got their hands on the Ultra Mind.

As they started to lose their invasion forces on U40, the Baders sent Bagon to attack the civilians taking shelter beneath the planet's surface. The monster, easily towering over the Ultra Warriors, destroyed the landscape with nothing stopping him. However, once Ultraman Joneus destroyed the Baders' battle station, he set his sights on the towering beast and proceeded to engage in combat. Bagon proved more than a match against the hero as despite Joneus's best efforts, the monsters was too large for his martial arts abilities to affect him and found himself tossed around like a rag doll even after using the Planium Ray on the titanic monstrosity. Joneus continued to persist as he eventually managed to grab Bagon and fly into the planet's orbit. Upon throwing him down, Joneus used the Planium Ray a second time with the aid of the planet's ozone layer to burn the monster up before crash landing with a cataclysmic explosion. Once the invasion was over and the threat of Bagon had ended, Joneus flew back to Earth to continue his mission of protecting the inhabitants. 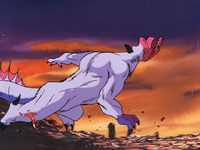 Add a photo to this gallery
Retrieved from "https://ultra.fandom.com/wiki/Bagon?oldid=513599"
Community content is available under CC-BY-SA unless otherwise noted.