None
Badan (バダン Badan) was a kaiju that appeared in episode 17 of The☆Ultraman.

Some time after the debacle with the Tough family, Professor Henry Nishiki found himself attempting to unravel the erratic patterns of locust migrations in Egypt. At the same time typhoons were mysteriously popping up around the region to the point where the Scientific Defense Guard sent Hiroaki to help the professor to see if there was any correlation. Before long Hiroki and Professor Nishiki encountered a giant swarm of locusts in the middle of what they thought was a typhoon until it was revealed that the culprit was a giant locust monster by the name of Badan. The locust swarm surrounding Badan clogged the fighter's turbine, forcing Hiroaki and Professor Nishiki to crash land near an oasis before being found the next day by the rest of the Scientific Defense Guard. Shortly after, Badan appeared from beneath the sands and attacked the Scientific Defense Guard for encroaching on its territory. Badan and the locust swarm attacked them again with Choichi turning into Ultraman Joneus before he would crash land as well. Joneus managed to dodge Badan's lasers easily, but was quickly thrown off guard by the giant bug's harpoon arms and soon found himself assaulted by the locust swarm. Thanks to Kei's quick thinking, the Scientific Defense Guard used their coolants to freeze the swarm and distract Badan long enough for Joneus to continue fighting. This gave Joneus the chance mercilessly assault Badan before finishing him off with the Planium Beam. 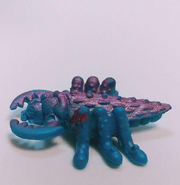 A Badan eraser
Community content is available under CC-BY-SA unless otherwise noted.
Advertisement