"Take over the universe? Stick to obnoxious outfits, not obnoxious plots. I'm not letting that happen."

Akane Sakanoue
Asuna Yamase (山瀬 アスナ Yamase Asuna) is a member of Xio and a supporting protagonist of the Ultraman X TV series.

As a child, Asuna was given a Kendo training by her father and became the strongest in her district. She also had a childhood crush but accidentally made him cried after winning a Kendo match against him.

According to a TV show, she graduated from a local high school, then joined Xio as a cadet and her excellent performance led her to be promoted to the investigation team. She admitted she joined because she didn't want something like the Earth's safety in the hands of men and would have ended up like an ordinary girl if she didn't join Xio

In the present day, she is partnered with Daichi during missions. While always act cold towards Daichi, but she grew a soft spot towards him over time. 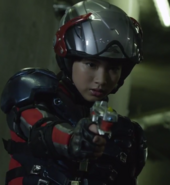 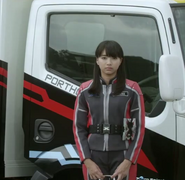 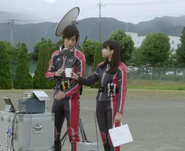