Space Warriors 2000
Astromons (アストロモンス Asutoromons)[1] is a Kaiju that appeared in the TV series Ultraman Taro. He and his original form, the Tigris Flower (チグリスフラワー Chigurisu Furawā), both appeared in episode 1. He is also the first legitimate Kaiju of Taro's time on Earth.

Astromons' name comes from the English term "Cosmic Monster," when translated into Japanese, it is "Astro Monster."

Astromons was initially named "Flower King," in the screenplay he was labeled as "Astro King."

Tigris Flower was a plant from space whose seed arrived on a desert of Earth and since became a legendary flower as it only bloomed every 100 years. Right at the end of the second age of aliens, the seed was planted by a local boxer named Kotaro Higashi. One night, the final Terrible-Monster of Yapool, Oil Drinker appeared and ZAT came to the area to battle with the Terrible-Monster.

Tigris Flower bloomed with a wide variety of attacks and soon formed into his adult form Astromons and battled with Oil Drinker. It didn't take long for the massive plant to eat the Terrible-Monster when Oil Drinker's head got stuck in his massive flower chest. After the battle, Astromons flew away into the night with Ultraman Taro's human host Kotaro Higashi clinging on his fur desperately to try to annoy the beast. Kotaro lost his balance and fell off and then rescued by a group of people.

The next day, Astromons attacked once again. ZAT soon appeared, and attacked once it got too close to its base.The base used its emergency escape and the base flew away leaving Astromons angry waving his tentacles in the empty air. During the attack, Kotaro's plane was hit, and sent crashing into the ground. Moved by this man's courage, the Ultra Brothers and the Mother of Ultra granted him a new life. The female hero placed her latest son, Ultraman Taro, into Kotaro. Not a second later, Ultraman Taro attacked Astromons. Taro attacked with many punches and kicks, until Astromons struck back with his acidic mist, allowing his to get multiple hits in. Taro managed to use the Strium Beam, and the massive plant monster was destroyed for good.

Astromons reappeared in the movie The 6 Ultra Brothers vs. The Monster Army.

Awoken by a rocket test that went terribly wrong in Thailand, Astromons, as well as the monsters Tyrant, Dorobon, and Dustpan, went on a rampage until they faced Hanuman. Hanuman withstood all of the monsters until Gomora appeared and attacked him as well. Hanuman was overpowered by the monsters and was encased in a crystal sphere by Gomora until the Ultra Brothers arrived to even the odds. Unlike the other monsters who were killed in battle, Astromons was killed along with Dustpan when they were both dismembered limb-from-limb by Hanuman's Hanu-Slash. They ran around hopelessly before crashing into each other and exploding into pieces.

Astromons appears in episodes 2, 4, and 12 of Ultra Super Fight. In this series, a female Astromons appears. She is portrayed as a beautiful monster, fought over by Eleking and Bemstar until Ace scared them off and won Astromons' heart. Ultra Heartbreaking Story Ace's First Love

However, it was not the end. Eleking and Bemstar sought revenge, and recruited an Alien Godola as a hitman to help them. The two monsters and the alien they recruited attacked Ace, with Bemstar and Eleking battling Ace as a distraction so Godola could carry out the hit. Ultraman Ace killed Bemstar and Eleking, then defeated Godola, but was too late. Astromons had already been killed by Godola, leaving Ace broken-hearted. Ultra Heartbreaking Story Don't Cry, Ace

Footage of his fight in Ultraman Taro was reused in New Century Ultraman Legend.

Astromons has been released four times throughout the Ultra Monster Series. All four come in different colors with one being green with red arms and flower, one with yellow and red arms and flower, the other two look accurate to the episode appearance but with one having gold arms. All have three points of articulation and stand at 6 inches tall. In 2013 he is released as part of the Ultra Monster 500 Series as # 34 in the series. He stands at 5in tall and has good look except that half the flower isn't red. It has 5 points of articulation. 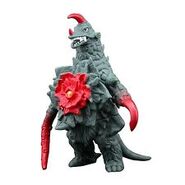 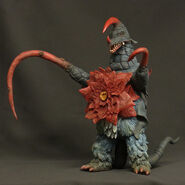 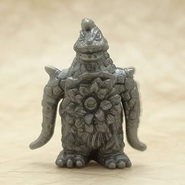 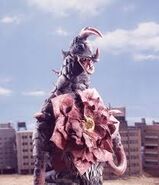 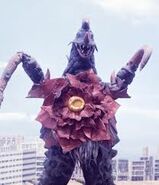 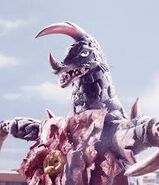 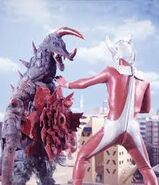