TBA
The manga version of Leo's twin brother. He is shown with his family (brother, mother, father, and teacher) on their home planet before it was destroyed by Alien Magma and he gained his Ultra powers.

The prince of the Kingdom of L77 in the Leo constellation, Astra was the younger twin brother of Leo, born to King Ars by his kind but sickly wife. The two were trained since their youths to be warriors under the tutelage of Drew, their father's most trusted advisor. The two grew to young adulthood under Drew's training and their mother's kindness but their relationship with their father was not as close.

The time came for the ceremony when their father would accept them as warriors/adults but in their father's eyes neither of them were ready and he did not give them the symbols of his acknowledgement, rings similar to the one he wore. This fact was overlooked by a sudden urgency where the kingdom's warriors were called together, all including Astra, Leo, and Drew. When they asked why their father was not present, custom stated the army did not march without the king, Drew pointed to a tower. The twins spied their father and watched with shock as he transformed into a red giant.

The twins and their army followed their father to the site of a meteorite where they came across an alien giant, known as Alien Magma. Astra watched as his father fought and was winning against the invader, but when the army and his brother's life was threatened their father began to lose. His brother rose up and offered his life in place of his father's but Magma took off with Astra instead, retreating to his spaceship.

Unlike the TV series, Astra was born possessing a natural human (or humanlike) form of his own. He uses a similar device to his brother and father, all three using identical rings and call out their own names when they wish to take on their Ultra forms. 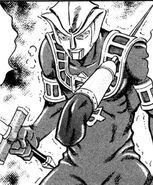