Ashuran (アシュラン, Ashuran) is an alien monster that appeared in the TV series, Ultraman Leo. He appeared in episode 34.

Ashuran was an evil alien monster who is believed to possess high intelligence. While Ultraman Jack was headed for Earth to both retrieve Dan's damaged Ultra Eye and present him with a new capsule monster, Ashuran ambushed the Ultra and forced him into battling on a nearby moon. Despite Ashuran's advantages with his double-sided body, Jack was able to survive their battle and continued on his way to Earth, but not without Ashuran locking the Ultra up with one of his masks.

Ashuran followed Jack to Earth and upon landing, began to lay waste of what was in his sights. MAC was left to deal with Ashuran while Jack (under the disguise of Go) was sent to find the Capsule Monster he was to deliver to Dan, which he had lost when he landed on Earth due to his conflict with Ashuran. Managing to rescue the capsule, Go returned to assist MAC in fighting against Ashuran by revealing who was in the capsule, Sevenger. Surprisingly, Sevenger was able to handle Ashuran in battle with ease. However just as it seemed Sevenger was about to finish off Ashuran, he returned to his capsule, as his time limit was up. A badly beaten Ashuran then saw straight through Dan, Go and Gen's disguises, and realised that they were Ultras, so he fled in terror, afraid to fight all three of the heroes at once.

Eventually, Ashuran grew cocky after he realised that Seven, Jack and Leo weren't pursuing him, and began an assault on Tokyo. MAC trained their weapons on Ashuran, but ultimately could only stun him for a few moments. Gen faced the monster himself by transforming into Ultraman Leo to battle, however Ashuran's double sided body made him a tricky opponent for Leo to fight, and so Go joined Leo by transforming into Ultraman Jack to assist him. Finally, after a brief double-teaming with both Leo and Jack, the two Ultras kicked Ashuran on each side of his head killing him in a shower of sparks. 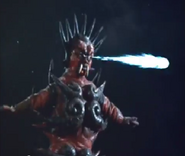 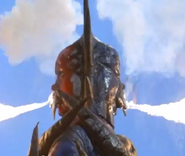 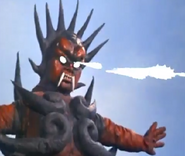 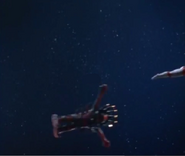 Figure of Ashuran, by Yamanaya. Figure also has the red side. 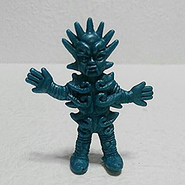