Arumazigon was used by Mad Go-Ne to instantly freeze a Self Defense Force base in the middle of the day. The base was breaking over time, Naoki was sent to deliver a device to help them. Arumazigon spotted Naoki driving and proceeded to attack him, starting with his ball form followed by an attempt to stomp on him. PAT arrived to distract the beast with a barrage of missiles, but the armadillo monster rolled up and quickly retreated. Mad Go-Ne became furious by the setback to his plan. A large squad of Alien Gross attacked Naoki, but PAT eventually took them out. This forced Arumazigon to pursue him once again. Naoki used his car to summon Jumborg 9 to fight Arumazigon. The armadillo monster quickly gained the upperhand thanks to a combination of ranged attacks and his clubbed tail. The robot hero kept fighting, but the beast had armor too thick to keep him down. Aruzamigon kept fighting until Jumborg 9 used a combination of projectiles to make him spin around and explode. 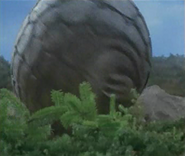