TPC
GUTS
The Artdessei (アートデッセイ Ātodessei) is a space-flight-capable carrier and battleship owned and operated by GUTS in the Ultraman Tiga series. After 20 years of secret construction led by Dr. Naban Yao, it made its first appearance in episode 19. It is large enough to load 3 GUTS Wings. Aside from standard laser beam cannon armament, it is also equipped with the Deluc Cannon (デラック砲 Derakku-hō) that attached to the Maxima engine power source

The ship employs a high-power laser generator called Maxima Overdrive, which played a role in a battle against Gobnu armies. GUTS to the Sky Part 2 Usually stored in F4 dock located in the bottom of the base, Artdessei needs to be lifted until it can sortie from the elevator gate. Since the development was underway in utmost secrecy, even the member of GUTS were unaware of the project at first. GUTS to the Sky Part 1 When Zoiger covered the whole Earth and Dive Hangar went under attack, the crew were forced to take shelter in the ship. Master of Darkness

In episode 32, this ship is seen combining with Lovemos, with its hull forming the central body of the monster. The Singing Investigation Robot 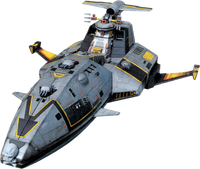 Space Pirate Ship Akebonomaru
Add a photo to this gallery

Retrieved from "https://ultra.fandom.com/wiki/Artdessei?oldid=539166"
Community content is available under CC-BY-SA unless otherwise noted.