Arstron (アーストロン Āsutoron), or Earthron, is a kaiju that first appeared in the TV series, Return of Ultraman, in episode 1.

Arstron first appeared mysteriously in a mountainous region without warning or origin, attacking a nearby village and setting fire to the homes with its heat ray. MAT arrived shortly after the monster arose, attacking the beast with their cannon fire but to no avail. Arstron continued destroying the village. Goh Hideki, the host of the newest Ultraman came to the scene, guided by Ultraman Jack's conscience came to the village to help some people who were trapped in the debris caused by Arstron's rampage, before unknowingly transforming into the new Ultraman Jack by sheer willpower. Jack quickly turned to face Arstron and the two fought, taking their battle from the ruined village to a nearby valley (presumably the same one Arstron emerged from). However, Jack's color timer was start to blink cause his strength to deplete and Arstron to gain an advantage, but Jack continued to fight back and eventually hit Arstron with a Specium Ray, causing Arstron to tumble back into a crater and explode into blue flames.

The first monster in the Babaloneon Empire, Arstron emerged from the ground and almost engaged Ghostron in battle. As the Science Garrison watched on in awe, yet another beast, Gokinezula, joined the three in a titanic three-way battle royal. As the three monsters were locked in mortal combat, Aboras and Banila emerged as well and battled elsewhere on the island. With five monsters running wild, the Science Garrison began to blanket the entire island with bombs in hopes of killing them all off, however the Babaloneon Empire fought back as well, downing their jet in between Arstron and Ghostron. Arstron was quick to respond to the Science Garrison's presence and quickly destroyed what remained of their ship. The Science Garrison however was not without its own defenses and was able to destroy Arstron after firing at rocket at the monster.

In this series, Arstron's origin is again not stated, and his attack comes out of the blue like before, attacking GUYS's HQ at a test site. However this time his actions are being guided by a Cherubim, who is using diverted frequency waves (originally intended to control Manquette Monsters) and directing them at Arstron to control him (in a rather comical way.) Ultraman Mebius arrives to do battle against Arstron and has the upper hand until Cherubim arrives and the two monsters double-team him. Team GUYS learns of Cherubim's control over Arstron and destroys the frequency waves that are doing so, severing Cherubim's control. Once freed, Arstron attacks Cherubim when provoked by the alien monster, but both monsters are destroyed by Ultraman Mebius, who uses his Mebium Blade to cut Arstron's head off.

In this series, Arstron appears again out of nowhere and attacks a Cherubim in the area (possibly reminiscing their relationship in the previous series.) It seems Cherubim has won as it hits Arstron with several fireballs causing Arstron to collapse, but Arstron feins his defeat, ambushing the other kaiju by tearing off his "ears" and killing it with his Magma Energy Beam. Shortly after his victory, Arstron is dragged underwater where he is forced to do battle against an Eleking, where he was not so lucky, being electrocuted to death by Eleking's tail.

Arstron reappeared in the movie Mega Monster Battle: Ultra Galaxy Legend The Movie as one of Ultraman Belial's 100 Monster Army. He was first seen reacting to the Plasma Spark as a spirit along with Roberuga Jr, Fire Golza, King Pandon, Alien Metron, and Gudon in a shot of the Monster graveyard. He teamed up with Zoa Muruchi, Telesdon, Alien Temperor, and Alien Hipporito to take on Gomora. When Reimon and Gomora went berserk due to Belial's actions, Arston was called back along with the other surving monsters to watch Gomora take on the Ultras. When Ultraman Zero arrived, Arston teamed up with the rest of the remaining monsters to take Zero down. He was the first monster to be killed by Ultraman Zero's Zero Sluggers followed by King Pandon, Verokron, Sadola, and Alien Hipporito.

Arstron (as well as Gomess (S) and Gubira) is one of the monsters who have been revived by Alien Bat to serve him.

Arstron appears in an alternate universe of Earth in Tokyo where it attacks Team U during their raid on an abandoned store for groceries. Despite Team U's efforts with their U Loaders, Arstron shrugs off their assaults and continues on his rampage. Shortly after Team U is beaten, Ultraman Dyna appears and quickly destroys Arstron, hurling him into the air (by spinning him around by his tail) and destroying him with the Solgent Ray.

Arstron returns in the episode 1 of this web series. In this series, Arstron is one of the victims of the Bezelbs. When Shinra visited Psychi, the doctor showed the power of the Kugutsu. Arstron was on Planet Zain next to King Guesra and both were infected with Kugutsu. Soon they receive the order to fight and the winner was Arstron when beating to the ground to Guesra, causing the death to him. The infected Arstron increases its power with Queen Bezelb.

During the final battle, Arstron, along with Vakishim and two Bezelbs, teamed up with Psyqueen to destroy the tree. However, Orb, Dyna, Gaia, Agul, and Cosmos appeared to try and stop them. While Orb tried helping an infected Amate, Gaia and Agul battled Psyqueen, Cosmos fought Vakishim, and Dyna fought Arstron. In the end, Arstron, along with Amate and Vakishim, were cured when Cosmos fed them the petals of the Tree of Life, and the kaiju and choju were sent somewhere far from civilization to live in peace. 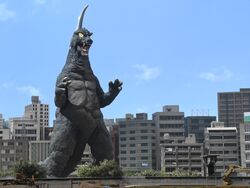 Arstron reappeared in episode 5 of Ultraman Geed where he emerged from underground and appeared in a city and went searching for a Little Star, which just so happened to be hosted by Moko, who was in a pet carrier being carried by Moa Aizaki. Before Arstron could crush Moa, Riku came rushing over to save her and transformed into Ultraman Geed and knocked the monster away with a flying kick.

As their fight began, Arstron struck at Geed with his tail only for the latter to dodge it in time. The Ultra then held him by the head and delivered a few sharp blows to him until Arstron figured out the Little Star's location and left, even going as far as to swat the Ultra away effortlessly. But still, Geed prevented the monster from obtaining it and kept up the fight. After kicking him away, Geed attempted to blow up Arstron with his Wrecking Burst, but Pega stopped him as RE.M. told Geed that they were close to some explosive tanks that would explode if he destroyed Arstron there.

With Geed in a bind, the kaiju took the advantage and attacked the Ultra with a Magma Beam. Afterwards, Moko gave up his Little Star, which took the form of the Ultra Capsule of Ultraman Cosmos and with that, plus the Ultra Capsule of Ultraman Hikari, Geed transformed into his new form, Acro Smasher. Afterwards, he used his Atmos Impact technique to push Arstron away from the tanks, preventing a city-wide explosion. He then jumped over him and taunted him to come closer and when Arstron charged at him, Geed slashed at the kaiju's horn with his Smash Beam Blade, dodged his Magma Beam, and finally used his Smash Moon Healing to calm the kaiju. No longer wanting to fight, Arstron dug back underground in peace.

Magma Beam
Add a photo to this gallery
Kugutsu Arstron 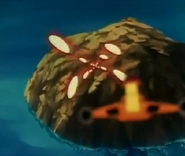 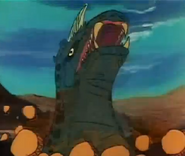 Arstron reappeared in the series, Redman.

Arstron first appeared in episode 3 where he appears on a hill and kicks a fallen tree to trip Redman but he jumps over it. Arstron tries to get away, but Redman chased him up the hill to a large field to fight. After a bit of battling, Redman threw the Red Knife, killing Arstron in a small explosion.

In episode 4, Arstron was tricked by Redman's teleportation and was killed with his Red Chop.

Arston reappears in episode 52 where he fights Redman right from the start. They kept the fight evenly matched against each other but eventually the hero kills the monster by jumping to the top of a mountain, where they started their fight, and landing a Red Kick to the face.

In episode 55, Arston fights Redman alone right from the start where they roll down a hill and have a go at grappling techniques at each other but Artson eventually lost to a final judo throw to the ground. Soon after that, Alien Mysteler would appear to fight him, but would eventually lose.

Arstron's final appearance in Redman was in episode 56, where he, along with Alien Mysteler, teamed up once again, this time with Sartan, to take down Redman. Even though they had the team advantage, Redman still didn't lose hope, and eventually, Arstron was killed with a Red Knife to the torso, with Sartan and Mysteler following afterwards.

The Return of Ultraman Part 1 Earthtron
Add a photo to this gallery
Retrieved from "https://ultra.fandom.com/wiki/Arstron?oldid=326852"
Community content is available under CC-BY-SA unless otherwise noted.