None
Ars (アルス Arusu) is an Ultra introduced in the Story 0 manga, he was the ruler of L77 and the father of Ultraman Leo and Astra.

The King of L77 Ars was bathed in the Light of the Plasma Sun and like the people of the Land of Light became an Ultra. Under the guidance of an M78 native named Drew, Ars used a royal stone, bathed in that same light to forge the rings both he and his sons would use to access the power of Ultra. In time Ars' Ultra alter ego became the protector of L77.

In time Ars married and his wife bore him twin sons, Leo and Astra. It was clear to him they had inherited his Ultra powers but lacked the device needed to release their Ultra forms. Ars took the same jewel he used to forge his own ring and forge rings for the two of them. He appointed Drew as their teacher, training them that they would become powerful protectors of their world. However, as they reached the age of adulthood he found that they were not ready for that power.

That night a meteorite crashed landed near the castle, Drew gathered the army to go investigate and when the young princes came and asked where their father was, Drew pointed to a tower of the castle. The two watched their father transform for the first time in their lives.

The royal twins and Drew went with the army as they followed Ars to a crashed meteorite. However it was not a meteorite, it was a Alien Magma scout ship, housing a Magma alien who came out. Ars knew what the invader's intentions were and attacked the alien swordsman on sight while his sons and subjects watch. The Magma was a proud and pompous creature and relished the idea of fighting and killing an Ultra but Ars made quick work of him with his superior combat mastery.

However, the underhanded alien did not come alone, the revival of the Gilas Brothers flew part of the capsule towards his men and sons. Throwing his sword to block it, he was left open for a stab to his leg, allowing Magma to make off with his younger child Astra.

Later, Ars rested and had his wounds attended to in human form as Drew explained the source of his Ultra powers to his son. Despite Leo's inability to control his Ultra powers, Ars set off in giant form and flew up to the Magma Fleet in space to rescue Astra. After making quick work of several ships, Ars came to a stop at the sight of his tortured son. Despite the Magma's attempts to use his son as a hostage, Ars retrieved Astra in a containment vessel. It was later that Leo arrived in Ultra form, assisting his father in battling the Magma fleet, followed by Drew.

However, Leo's lack of experience was costly and Ars had to shield his son, from the Magma aliens' super weapon, which exploded in the process but dealt the old king fatal wounds. Ars gave Astra's capsule to Leo and after a few words disintegrated into light, leaving behind only his sword.

Like his son, Ars used a ring to transform, both his and the rings of his son were forged from the same stone, which was bathed in the light of the Plasma Sun. Ars used a similar procedure as his son, outstretching his ring hand before the ring shines.

An example of Ars' speed 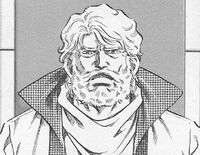 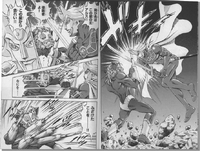 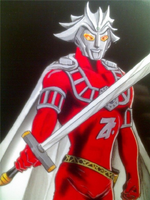 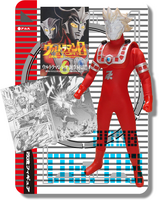