Aroza was an ancient dinosaur that died and his fossils where shown in the National Science Museum. Then when the Invaders arrived on Earth, they stole the Aroza fossils and revived it making it to cause chaos. The night he was first spotted both the SGM and Self Defense Force rushed in with the latter attacking him with jet fighters. During the rampage Kyotaro turned into Mirrorman to fight the giant dinosaur. Aroza held him off with lasers followed by Mirrorman tackling him. The Mirror Knife was soon used only for the beams to be absorbed into the monster's eyes. Before long Aroza gained the upper hand and used several shots from his mouth lasers to fend off the hero until he fled into the second dimension, allowing the giant dinosaur to walk off to the bottom of the sea.

The next day Aroza returned at dusk near a Self Defense Force base that had been a frequent obstacle for the Invaders. The giant dinosaur shot down jet fighters guarding it while an old fisherman that blamed Aroza for killing off the fish faced him with a harpoon. Kyotaro tried to stop the fisherman while Aroza used a fire ball to stun him using the shockwave. He begged Kyotaro to fight him to save the fish. As the giant dinosaur rampaged, Kyotaro turned into Mirrorman using the ocean. The giants tackled one another in close combat followed by Aroza using fireballs. Mirrorman then proceeded to throw the giant dinosaur and reflect his fire balls back at him. The fight came to an end after a Mirror Slicer was used to blind Aroza and the Silver Cross finished him off. 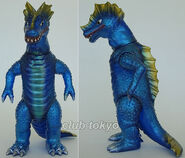