Armored Darkness (アーマードダークネス Āmādo Dākunesu) is a powerful Kaiju from Ultraman Mebius. A suit of sentient armour that is capable of fighting on its own with full autonomy, Armored Darkness was originally created by Alien Empera. Though Armored Darkness was defeated and destroyed by Mebius, it later returned under the control of two other extremely powerful beings; Alien Reiblood and Ultraman Belial.

After the death of Alien Empera, the sentient being known as Armored Darkness was activated to carry out the Emperor's Plan B. To make its presence known, Armored Darkness revived the monsters (Saramandora, Roberuga, Mukadender, and Kelbim). As the news GUYS battled with (and eventually destroyed) the revived monsters, Ryu, now captain of GUYS noted that the revival of these monsters were very similar to that of how the Emperor revived his monsters in the past. Before anything else could have been solved, a massive ball of dark flames appeared and sucked in Ryu and his subordinate, transporting them to a barren wasteland of darkness and ruination.

As they flew through the strange world, Ryu noted to his subordinate that it was similar to the Earth during the Emperor's attack. Just then they were attacked by Armored Darkness himself. Just like his creator, Armored Darkness was impervious to all of Ryu's attacks and Ryu stood no chance in defeating it. Crashing, Ryu distracted the sentient armor while his subordinate escaped out of the plane, seemingly dying. Just then, Ultraman Mebius returned to face off against Armored Darkness. Again, Armored Darkness's strength was more than Mebius could handle alone as it easily tossed him around, even his beam was useless as the Darkness Fear they were in restricted the use of light. Then just as Armored Darkness was coming in for kill, it froze in place, as if something was keeping it from killing Mebius. Mebius heard a strange voice from inside the walking armor, with the opportunity, Mebius got hold of Armored Darkness's sword and struck it in the head, weakening the armor into freezing in place temporarily. Meanwhile on Earth it was noted that the Darkness Fear was falling to Earth, it was calculated that when it hit, the collision would decimate the Earth wiping out mankind.

While the subordinate weeped, Mirai informed him that Ryu was alive, saved by the power of Ultraman King. He revealed that after Alien Emperor's defeat, Armored Darkness had been known for some time and Ultraman Hikari was sent by Ultraman King to destroy it before it could reach Earth, but the Armor's strength overpowered him and possessed him. Thus Ultraman Hikari was inside Armored Darkness, being possessed underneath it. Shortly after Ryu reappeared unharmed, the original members of CREW GUYS arrived to assist Mirai and Ryu in the battle, and just in time as Armored Darkness was just awakening to resume its battle against Ultraman Mebius.

Noting that Armored Darkness still had the open wound on its forehead, Ryu flew his plane ejected from it and flew into the wound. Within Armored Darkness, he was reunited with Ultraman Hikari and with it, Hikari burst free from Armored Darkness's control, blowing the Armor into pieces in the process. The battle however was not over yet as Armored Darkness's body rejoined back together by the Darkness Fear and continued to do battle with the two Ultras. Then Ultraman Mebius and Ultraman Hikari once again joined together with CREW GUYS to form Ultraman Mebius' Mebius Phoenix Brave and from that point on, the battle was in favor of Ultraman Mebius. Finally after slicing it down the middle if its body with its own sword, Ultraman Mebius destroyed Armored Darkness with the Mebium-Knight Shoot, ending the Emperor's last effort to conquer the Earth. After this the Ultra split apart, Mebius teleported back to Earth with all of Crew GUYS, while Hikari used his telekineses to halt the drop of the Darkness Fear and return it to space.

In this series, Armored Darkness acts as the enforcer of Alien Reiblood, and was sent by him to kill Ultraseven (who was on reconnaissance duty, looking for Ultraman due the events of the previous series). This battle between the Armor and the Ultra is occasionally seen as visions by Rei, who is going through mental bursts of rage from his Reiblood energy building up.

Although the battles were only occasionally seen, Armored Darkness was victorious as he possesses Ultraseven (as well as an Alien Mefilas) and uses their bodies to fight against Rei and his monsters, Gomora and Litra. During the course of the series, Rei had acquired Ultraseven's Eye Slugger and with it in hand, uses it on Armored Darkness, awakening Ultraseven's will power from within it and weakening Armored Darkness to the point to where Gomora can destroy it. Upon Armored Darkness's destruction, Ultraseven was released and thus presented Rei with his Miclas.

During the series finale, Armored Darkness is revived and possessed by Alien Reiblood to kill Rei and Gomora. However after the assistance of both the ZAP SPACY as well as Grande and Red King, Armored Darkness is destroyed yet again, this time by EX Gomora and EX Red King.

"It is true that His Excellency has once died. But his soul has integrated with the dark armor and he has resurrected. Here at the Monster Graveyard."

Armored Darkness appeared in Ultra Zero Fight with Darkness Five when they made their first appearance. His positioning implied that he was their leader. It was later, after fighting Ultraman Zero for his friend Pigmon, Armored Mefilas called to a being he referred to as 'Emperor'. The sky turned black with lightning arced all over as the armor appeared on a mountain top. However, when the helmet fell of, it is revealed that the being inside the armor and the one who controlled the Darkness Five, was none other than Zero's arch-enemy Ultraman Belial, who had somehow returned from the grave. After an intense battle, Zero in Ultimate Zero successfully thrust his sword into Belial's chest. This however sprung a trap intended to have Belial leaving the armor and possessed Zero as his new body. 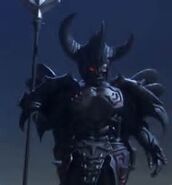