The Armed Nexus, unlike most bracers, are not artificial constructs but natural parts of Nexus' anatomy, much like Protectors.

The bracers assist him in manipulating energy for his attacks and can even absorb dark energy and convert it for defense. Their most prominent ability is being used to generate the Meta Field where Nexus can fight Space Beasts without damaging the area around him. They can also be used as blades thanks to their sharp edges.

The right-handed Armed Nexus becomes the Arrow Armed Nexus (アローアームドネクサス Arō Āmudo Nekusasu) as Junis Blue, and provides Nexus with a variety of weapons depending on which mode it is set to. 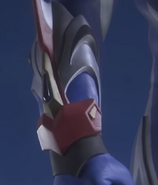