Destroyed
The Armed Mephisto (アームドメフィスト Āmudo Mefisuto) is a pair of black-colored gauntlets used by Dark Mephisto and his clone. They are the evil counterparts to Ultraman Nexus' Armed Nexus.

In the same vein as Nexus, the Armed Mephisto appears to be natural parts on Mephisto's anatomy. Most of his beam attacks involve charging energies through said devices.

Whereas the left Armed Mephisto is a repaint of the Armed Nexus, the right side of the bracer can unleash the Mephisto Claw (メフィストクロー Mefisuto Kurō), a two point claw weapon ideal for slashing and summoning the Dark Field. 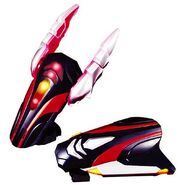 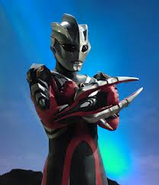