Arindo (アリンドウ Arindou) is a kaiju who appeared in the TV series, Ultraman Taro. He appeared in episode 9.

A new breed of ant, the Arindo Ants took up shelter in one of Tokyo’s buildings. Their nesting caused the structure to weaken until it collapsed. When seeking out a new home, two children managed to capture one of the creatures, hoping to show it to the adults in order to warn them. Before they could, however, it escaped, leaving them without any evidence. Nonetheless, ZAT, decided to investigate. As they were investigating, they found the swarm inside another building. Able to breath fire, the ants forced the building to be evacuated and soon took off into the air, looking for yet another home. ZAT's primary jet then attacked the swarm in midair. The swarm quickly fell to the Earth, but die it did not! Instead, the ants transformed into the Kaiju Arindo.

Now as it's true form, Arindo started spewing fire and acidic mist over the city, it's actions made Kotaro Higashi transform into Ultraman Taro. Within an unprepared city, the hero had little time to waste and quickly went for the kill with the Strium Beam, but Arindo was much stronger than his previous opponents! It shrugged off the attack as if it were nothing! The hero went in close, hoping to pummel his foe into defeat, but when he grabbed its antenna, Arindo used the Electric Current attack to shake Ultraman Taro's hand off. However, when Arindo tried to use his acid mist on the hero, Taroh formed an energy barrier and forced it back. This quickly made the ant-like monster lash out with flames, only to be put out by a stream of water fired from the guardian’s hands. Arindo was knocked down by the stream, and as he stood up, Ultraman Taro soon used the Ultra Dynamite to finish off Arindo. A wall of destructive force was unleashed on Arindo, and its body was quickly engulfed and destroyed by it. 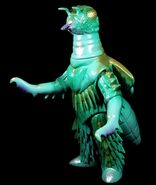 Figure of Arindo, by Bear Model. 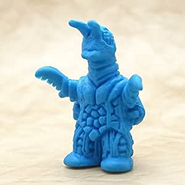 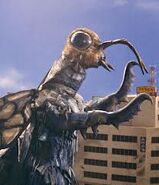 Arindo and Ultraman Zero in a stage show 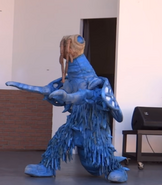