Unknown
Arigera (アリゲラ Arigera) are an amphibious Kaiju species from the TV series, Ultraman Mebius. It first appeared in episode 38.

Entering Earth's atmosphere, the space monster Arigera came to attack the earth. Despite GUYS and Ultraman Mebius being deployed to stop it, its sheer speed was more than enough to make the space monster versatile and uncatchable by both heroes, until the monster was shot down into the ocean by GUYS Ocean.

Noticing that Arigera can emit frequency waves, GUYS used it to locate and trap the monster. Working together with GUYS Ocean, a game of "cat and mouse" is set up to drag the Arigera onto dry land in hopes of finishing it off. Once Arigera was marooned onto dry land, it refused to go down without a fight proceeded to try and take down both GUYS' ships with its energy balls. Ultraman Mebius returned and both Ultra and monster fought to a standstill. Ultimately, Mebius won by pulling out his Mebium Blade and slicing Arigera right down the middle. The two half's floated for a second before exploding. Isana of the Ocean

Arigera are seen in flocks and a school of them ambush the ZAP SPACY crew when they are trapped underwater and dangling dangerous over a chasm. Not willing to endanger themselves by using Rei's Eleking, the ZAP SPACY uses the opposite frequency that Arigera produce to scare away the school of Arigera from harming them. However, these actions would attract another monster later on. The Pendragon Doesn't Rise to the Surface!

In this series, Arigera was a monster that belonged to Alien Temperor. It was used prior in battle to defeat an Alien Mefilas that had a conflict with Temperor. However, both master and monster were killed by the vengeful Mefilas when he returned as "Armored Mefilas." Arigera's throat was slit by the Darkness Broad. Armour of Darkness

Arigera reappeared in the movie Mega Monster Battle: Ultra Galaxy Legends The Movie as one of Ultraman Belial's 100 Monster Army. Arigera is first seen as a spirit along with Red King, Doragory, Telesdon, Alien Babarue, and King Joe Black, who would later be captured by Belial. He then teamed up with Goldras, Silvergon, Guesra, Twin Tail, Gudon, Gomess, Magular, Alien Baltan, Antlar, and Zetton to take on Ultraman. When Reimon and his Gomora went beserk because of Belial, Arigera, along with the other surviving monsters, stood back to watch Gomora fight the Ultras. When Ultraman Zero arrived, he teamed up with the other monsters to take him down. He and Birdon were killed by Zero's Emerium Slash in the final battle. 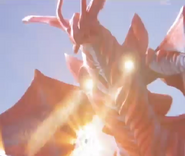 Arigera reappeared in the puzzle role-playing game for mobile devices, Ultraman Galaxy as a UR (Ultra Rare) card that you can unlock him in a event called Lord of Darkness with a rare chance of getting Arigera. 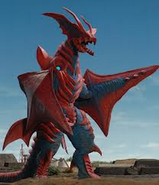 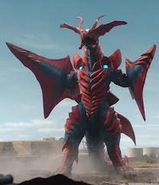 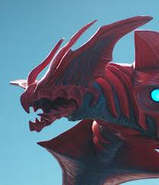 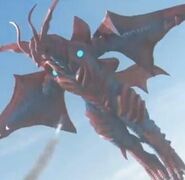 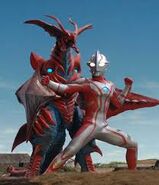 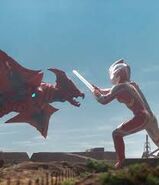 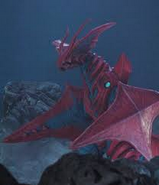 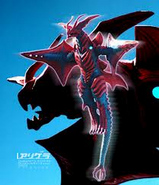 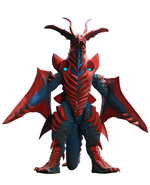 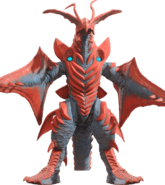