The SGM was investigating a change in the spectrum of vegetation in Chichibu Forest likely caused by radiation. They investigated and before long encountered the monster Arigeida bursting from a hill. The mole monster managed to shoot down the Phoenix 3 as Fujimoto and Murakami tried to flee, forcing them to eject. Kyotaro got word of this and with his camera lens quickly turned into Mirrorman. The hero began the battle with a series of punches, but Arigeida retaliated with beam absorbing flashes to prevent the Mirror Knife from being used. This allowed the mole monster to easily dominate the fight and Mirrorman had to retreat due to the energy time bomb. Following this Arigeida burrowed back underground. Back at base Dr. Mitarai concluded that Arigeida had light matter glass for eyes which allowed him to absorb the hero's beam energy. He later figured out that the Invaders plan to use the monster to destroy the largest rocket base in Japan based on his movements, forcing the SGM to protect it.

Before long Arigeida emerged from the ground once he was close enough to the rocket base. During this the Invaders bragged to SGM that they were unable to use the Jumbo Phoenix as Fujimoto passed out on the base monitor. Yuki and Yasuda were sent out with Dr. Mitarai to save him with the barely fixed Jumbo Phoenix. Phoenix 1 and 2 were sent after Arigeida as the mole monster easily went through the rocket base's defenses and told to aim for the eyes. Kyotaro transformed into Mirrorman once more, charging at Arigeida who was about to attack a rocket. The hero landed many hits and dodged the mole monster's projectiles, partially thanks to Arigeida being focused on destroying the nearby rockets. The monster soon hit Mirrorman with a combination of antennae lightning and white gas to stun him. The hero found a nearby missile he threw into the mole monster's mouth, the resulting explosion severing his antennae. Seeing Arigeida stunned, Mirrorman used the Miracle Kick to quickly decapitate the monster. 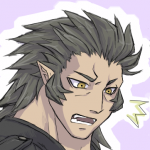 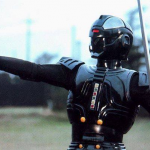