Planet Earth (World of Side Space)

Arie's name is a rearrangement of the name of the famous Victorian-era author Mary Shelley, as 刈 writen as two katakana is the katakana for Mary and rearranging the pronunciation of the remaining pronunciations creates Shelley.

Arie Ishikari first appeared in episode 18, helping an amnesiac Kei Fukuide to hide from Moa Aizaki and Riku Asakura. After taking Kei to her home in the mountains, she explained that she had wanted to write a book about Kei before his disappearance and introduced herself to him. Arie decided to protect Kei and allow him to take refuge in her home.

Upon Kei regaining his memories and vowing to continue Ultraman Belial's legacy, Arie witnessed Kei summon a Zaigorg. Later, while hiding behind a tree, she witnessed Riku transform into Ultraman Geed after Kei transformed into Thunder Killer. When Kei reverted back to his human form after being defeated by Geed, Arie decided to take in Kei despite his angry objections.

Later, when Kei took over Nebula House, and sent a Mecha Gomora to attack Geed, Arie kept Ultraman Zero busy by distracting his human host, via an interview about his company's products. After Kei had been healed of his injuries, he met with Arie who arrived via car to pick him up, the two having become partners.

Upon recieving news that AIB collected the Dark Lugiel and Alien Empera capsules, Kei formed a plan with her. She was tied to a tower and acted as bait for AIB. Upon AIB's arrival to the scene, Kei requested they to hand over the two capsules. The whole trade-off was a fake, Leito Igaguri (Zero) and Zenna began to fight off Kei.

Leito saved Arie and handed her over to AIB. Little did the heroes know Kei had laid a trap. After the escape car crashed, Arie stole the briefcase, containing the capsules, and brought it to Kei. Just as things were looking good for her, Kei suddenly stabbed with an Energy Blade into her abdomen, thus killing her.

"I have been your side all along. Didn't you think it is strange? Even though I was gone, you were still able to Fusion Rise."

She is later revealed to have survived, and revealed to have been the one empowering Kei to allow him use of Fusion Rise once more, as she was secretly being used by Belial as his host. When Belial left her body, she collapsed, and what happened to her afterwards is unknown.

Arie is a normal human, and all of her powers come from Belial, either through possession or Arie willingly letting him survive through her. 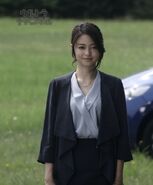