Aribunta (アリブンタ, Aribunta)[1] is a species of ant Terrible-Monsters that first appeared in episode 5 of Ultraman Ace. It was created by combining a carnivorous ant and a space monster. The servants of one of Yapool's agents, Giron Man, two Aribunta were tasked with constructing an underground fortress for their master beneath the city of Tokyo, attacking any humans unlucky enough to be caught in their path. After Ace defeated the first Aribunta, the second went with its master to attack the surface while Ace was imprisoned underground. Fortunately, Zoffy came to the rescue, then joined Ace in defeating the two subterranean menaces. Since Aribunta's debut, several other individuals of the species have appeared, almost always as servants of alien beings.

Aribunta's name is a portmanteau of Ari (蟻), the Japanese word for ant, and Marabunta, a synonym for army ants.

Aribuntas were monsters brought by Giron Man to assist him in his plan to create an underground fortress underneath Tokyo. While assisting the subterranean monster, Aribunta fed on several women who possessed Type O Blood by sucking them underground, which TAC had been investigating lately. They eventually made themselves known when one attacked a subway train filled with passengers and killed them with its spray. Finally TAC tunneled underground to confront the threat, only to encounter an Aribunta. As Hokuto and Minami were prowling the upper earth to test and see a hypothesis, both of them are pulled underground by one of the Aribuntas. Luckily, the two transform into Ultraman Ace and thus he and the Aribunta fought. After the two traded punches and kicks, Aribunta tried to kill Ace with his misty spray but Ultraman Ace quickly used his Metalium Beam and killed the Aribunta.

It was then that Giron Man revealed himself, imprisoning Ace underground and taking the second and last Aribunta with him to the surface to lay waste to the surface world. However after sending a distress call to Zoffy who arrived on the scene to rescue him, Ace managed to free himself from his underground prison and returned to the surface to face off against both Aribunta and Giron Man. It seemed the match favored the combined efforts of Aribunta and Giron Man, but after Zoffy returned to the surface (after he had saved TAC) the two Ultra Brothers teamed up and the match became evened out. After a lengthy fight, Zoffy grabbed Aribunta around the neck and ran towards Ace whom had Giron Man around the neck as well, and the two Ultras rammed their heads together breaking their necks. Both Terrible-Monster and master fell to the ground, dead.

After luring in Sakuya and Sho (he jumped in to rescue her) with his antlion pit, Aribunta revealed himself while Sho immediately transformed into Ultraman Victory and immediately Ultlance his right hand into EX Red King Knuckle to shove Aribunta away from his sister. He then attacked Aribunta by Ultlancing Eleking and King Joe Custom and using their attacks against him, unbeknownst to him that Yapool is studying the new Ultra's power ups. Seeing they weren't enough, Sho switched to his Sadola Scissors and was doing pretty well until Yapool showed up and attacked Sakuya. After the Terrible-Monster attacked Victory (because he was distracted by Yapool), the Ultra switched Ultlance, this time to his Gudon Whip and whipped him a few times. Aribunta was weakened but still kept Victory at bay with his flames until Ultraman Hikari showed up from above, firing his Knight Shoot at him, and then slashed at him with his Knight Beam Blade.

After Hikari recharged Victory, Aribunta rose up from the ground to fight him again, This time, however, Victory used the Spark Doll Hikari gave him to summon the Knight Timbre and transformed into Victory Knight. The Ultra then slashed at Aribunta with the glowing sword four times then finished him off with a Knight Victorium Flash. Ultra Fight Victory

When Alien Nackle Nagus of the Planet Invasion Union and his minions was losing in a fight against Gai Kurenai, Aribunta was summoned by Jugglus Juggler to provide the sinister beings with enough time to escape on their spaceship. After the Terrible-Monster dissolved a building, he was confronted by Ultraman Orb, transformed from Gai, in his Spacium Zeperion form. Orb had Aribunta on the ropes when it came to close quarters combat, even when he was pinned down by the latter. After he suffered the Terrible-Monster's acidic spray and dodged his stream of flames, Orb turned his Burnmite form and used his Stobium Counter to cancel out Aribunta's flames and then transformed into his Hurricane Slash form to finish him off. After he summoned his Orb Slugger Lance and used it to inflict some serious damage on Aribunta, he lifted and hoisted him up into the air and then finished him off with his Trident Slash. The Forbidden Forest

Aribunta emerged from its pit causing an enormous sinkhole to appear in Ayaka City. It used its flame attack to further decimate the city before Ultraman Rosso and Blu arrived to intervene. The beast proved to be a greater challenge for the two due to its increased strength from being a Terrible-Monster. Aribunta was soon dealt with and was defeated by a flaming tornado created from Rosso's Wind and Blu's Flame forms, much to the dismay of the creature's summoner Makoto Aizen. The World Is Waiting For Me

Aribunta is owned by the Villain Guild, being used by Alien Zetton Zolin to target Eneclone facilities so that he could take advantage of fluctuating stock prices. It is first summoned to the surface during El-Ray's confrontation with Hiroyuki Kudo, which El-Ray escaped by getting Aribunta to burrow underground along with him. He summons Aribunta again during his fight against Homare Soya and Mystie. Hiroyki transforms into Ultraman Titas and was initially able to beat the Terrible-Monster down, until it employed a new tactic: repeatedly burrowing underground and coming up to attack at short intervals. After getting hit a few times, Titas listened to the Terrible-Monster's movements underground and was able to deduce where it would come up next, and suplexed it. He then changed to Ultraman Taiga Tri-Strium and slashed it numerous times with the Taiga Tri Blade before destroying it with the Tri-Strium Burst. Sand Castle

Figure of Aribunta, by Bandai.

Ditto, but a different version with a different paint-job and sold as a set of multiple pieces intended for the owner to "put together" to construct the figure. 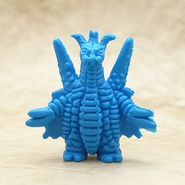 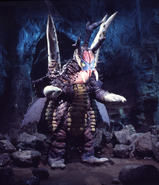 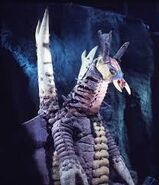